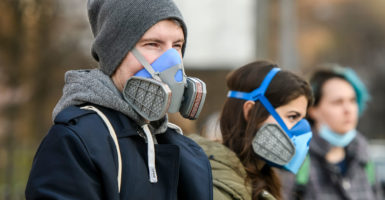 KYIV, Ukraine—China has been front and center in helping Ukraine respond to its coronavirus outbreak, underscoring what some say is Beijing’s global gambit to exploit the pandemic for geopolitical gain and exonerate itself for allowing the disease to spread.

“China is trying to shape the post-outbreak world, even as it has lied to the world, unleashed a global plague, and continues to deny its scandalous failure,” said James Jay Carafano, vice president for The Heritage Foundation’s Davis Institute for National Security and Foreign Policy.

As of Monday, Ukraine counted 1,319 confirmed cases of COVID-19 and 38 deaths from the disease caused by the new coronavirus. Last week saw the first two COVID-19 cases among Ukraine’s military ranks.

In an April 1 Facebook post, Ukrainian Deputy Interior Minister Anton Gerashchenko wrote that the outbreak will hit its peak in Ukraine between April 15 and 25.

“Hard times are yet to come,” Gerashchenko wrote.

Cargo planes are continually ferrying medical supplies to Ukraine from China. Ukrainian officials are touting those deliveries as evidence that Ukraine is proactively fighting the spread of COVID-19.

“As soon as one plane takes off from China, it will meet the next one from Kyiv. And so on every day. No breaks or weekends,” Kirill Timoshenko, deputy head of the Ukrainian President’s Office, wrote on Facebook.

On March 23, a Ukrainian Air Force Il-76 strategic airlift jet landed at Kyiv’s Boryspil International Airport with a 20-ton delivery from China. Included were an unspecified number of medical ventilators, along with 250,000 COVID-19 tests and 600,000 medical masks. The transfer reportedly was paid for in part by Jack Ma, the Chinese business magnate who co-founded the Alibaba Group.

“Tonight our first cargo plane from China landed in Boryspil,” Zelenskyy said March 23. “This is only the first batch of what we really need.”

On March 29, another planeload of supplies arrived in Ukraine from China—this time with 300,000 respirators, 35,000 protection suits, and 1.8 million normal medical masks. On April 1, Zelenskyy announced another Chinese delivery of protective gear and test kits.

“Our fight against the spread of coronavirus infection in Ukraine continues every day,” Zelenskyy said in a video address.

Through its airlift of medical supplies, China demonstrably has bolstered its reputation in Ukraine. In fact, more Ukrainians now count on communist China to come to their aid than any other country or international organization.

According to a new poll by the Kyiv International Institute of Sociology, 34% of Ukrainians said China was doing the most to help their country. The World Health Organization garnered 11% of responses, the EU 10%, the United States 9%, and Russia 9%.

“China is absolutely exploiting COVID-19 to build relations with Ukraine, as they are elsewhere in Europe and the world,” Dean Cheng, senior research fellow for The Heritage Foundation’s Asian Studies Center, told The Daily Signal.

“China, unlike the U.S., is still thinking geopolitically even in the time of COVID, and therefore is thinking about how to reshape the post-COVID-19 world toward one it would prefer,” Cheng said.

Nevertheless, some Ukrainians remain skeptical about the ultimate significance of China’s gambit.

“Our general public hasn’t yet realized the scale of the trouble. Thus any assistance [from China] isn’t perceived as a life-or-death issue,” Khara said.

According to the World Health Organization, more than 1.2 million people around the world have been infected with COVID-19 as of this article’s publication Monday.

The new coronavirus originated in Wuhan, China, late last year. Medical experts have criticized Beijing for ignoring early warning signs and not taking the appropriate measures to stop the coronavirus outbreak before it became a pandemic.

A March report by researchers from the University of Southampton found that the number of COVID-19 cases could have been reduced by 95%, had Chinese officials enacted social distancing measures three weeks earlier. Intervening just one week earlier would have reduced cases by some 66%, the study found.

According to Beijing, China now has its outbreak under control. Yet, some experts say China is exploiting the COVID-19 pandemic to make diplomatic inroads with countries in short supply of vital medical equipment, such as ventilators and protective gear. On Saturday, for example, New York state received 1,000 ventilators from China.

Some say China’s so-called humanitarian outreach to countries ranging from Ukraine to the U.S. is meant to distract the world’s attention from China’s culpability in abetting the pandemic’s genesis.

“China’s response to the outbreak is unforgivable,” Heritage’s Carafano said. “The regime’s suppression of information and attempts to save face guaranteed it would become the most destructive pandemic in a century.”

Ukraine already implemented a nationwide lockdown, forcing all businesses other than grocery stores, pharmacies, banks, and gas stations to close.

Ukraine’s Cabinet of Ministers on Friday approved a new list of stepped-up national lockdown measures, including mandatory use of face masks in public places; a ban on gatherings of more than two; the closure of all parks, playgrounds, and recreation areas; and a requirement to carry an official form of identification when in public.

“We predict we will soon see a peak rise of coronavirus incidence in Ukraine,” Ukraine’s Chief Medical Officer Viktor Liashko told reporters in Kyiv on Friday.

“Therefore, we propose tough measures since our calculations show that by implementing additional measures to isolate people and limit their mobility, we can significantly reduce the number of critical cases and the number of deaths,” Liashko said.

Some Ukrainian lawmakers have said the national lockdown may last until May 15.

“Coronavirus is spreading throughout Ukraine. The only way to break the chain of infection and save human lives is to strengthen quarantine measures,” Ukrainian Prime Minister Denys Shmyhal said in a video address.

Ukraine is in the midst of a top-to-bottom political, economic, and cultural divorce from Moscow due to Russia’s 2014 invasions of Ukraine’s Crimean Peninsula and Donbas region. Consequently, Kyiv has been looking for new markets in which to sell its goods, as well as foreign investors to jump-start its economy.

Over the past five years, Beijing has ramped up its investments in Ukraine to prepare the nation’s transportation infrastructure for its role as a portal into Europe for China’s proposed One Belt, One Road overland trade route across Asia. Beijing ultimately wants Ukraine to become a stable, reliable partner through which Chinese goods can flow into Europe.

Last year, that effort bore fruit when China overtook Russia as Ukraine’s top trading partner. Ukraine has replaced the U.S. as China’s top supplier of corn. And China is now the top purchaser of Ukrainian military arms, according to data from the Stockholm International Peace Research Institute.

As part of its rupture with Moscow, Ukraine in 2015 banned all vestiges of its Soviet past. It’s now technically illegal to fly the hammer-and-sickle flag or to play the Soviet national anthem. All statues of Vladimir Lenin have come down.

Thus, it’s not without a touch of historical irony, some say, that in the midst of the coronavirus pandemic, Ukrainians identify communist China as the country that has helped them the most.

“Though we still undergo decommunization, the majority of Ukrainians do not draw a direct line between the communist ideology and China,” Khara said.

“Meanwhile, we keep in mind that China has never supported Ukraine in the United Nations and elsewhere on the issues of [Russia’s] illegal annexation of Crimea and Russian aggression and occupation in the Donbas.”