Advancing Economic Freedom Is the Antidote to ‘Corrosive’ Chinese Capital 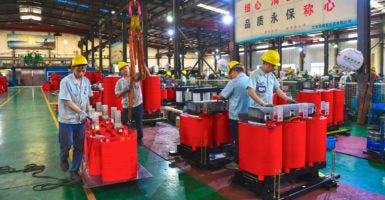 A recent study by the Center for International Private Enterprise looked into the patterns, trends, and characteristics of Chinese capital flows to six countries in Southeast Asia, and what it found were disturbing effects on the governance and economics of the recipient nations.

The countries examined were Cambodia, Indonesia, Malaysia, Myanmar, the Philippines, and Vietnam. The center shared its findings in a report, “Mitigating Governance Risks from Investment in Southeast Asia.”

The study analyzed official data, as well as transactions-based data for China’s financial engagement (foreign direct investment, aid, and commercial loans) with those countries. The center’s report highlighted that “a growing volume of evidence indicates that many forms of capital emanating from authoritarian nations have a corrosive effect on democratic institutions and private enterprise in recipient countries.”

According to the Washington, D.C.-based center, what it called “corrosive capital” is money, “either state or private, that lacks transparency, accountability, and market orientation” and “exploits governance gaps to influence economic and political developments in recipient countries.”

In other words, corrosive capital directed by authoritarian power undermines the rule of law and economic freedom, threatening democracy.

In fact, as documented by Heritage Foundation research, the Chinese government has targeted geostrategically vital chokepoints around the globe, such as countries in Southeast Asia and the Horn of Africa, for China’s Belt and Road Initiative loans.

The investment capital is much-needed, but the corrosive and nontransparent nature of the lending practices is facilitating corruption both in China and in the recipient nations.

More than ever, it’s critical to shed light on the complex structures and networks of China’s opaque model of state capitalism and decode what my Heritage colleagues have called the “connections between contractors, companies, state-owned enterprises, the Chinese military, and the Communist Party of China.”

By making China’s Belt and Road Initiative policies and lending practices an explicit subject of discussion in bilateral and multilateral strategic dialogues, Washington can sharpen its counter-approach with sustained promotion of greater transparency and rule-based transactions.

One of the immediate and practical steps toward that objective is to produce an annual report on China’s Belt and Road Initiative and its strategic implications and consequences, as advocated by The Heritage Foundation. Creating a database designed to track and document the initiative’s projects would be a powerful and informative tool.

Fundamentally, deepening a network of vibrant free-market economies—underpinned by the rule of law, accountable government, and market openness—would foster substantive partnerships among the countries that transcend economic bonds.

At the heart of such a network—which can advance and sustain a peaceful, rules-based international order and ensure broad-based economic growth—is the task of advancing economic freedom.

Washington isn’t able to give countries the political will that they need to transform their economies according to the principles of economic freedom. By getting involved at critical levels, however, the U.S. can ensure that its concerns and advice are taken into account.

The ongoing coronavirus pandemic provides a needed reminder that free-market capitalism is the fundamental foundation for a free and prosperous society.

Strategic competition with China cannot be binge-watched. It is going to be a long and complicated fight with no clear historical analogy.

The COVID-19 crisis may be the spur Americans need to gird themselves for that fight. But we cannot overreact in the moment and set precedents that actually will undermine that long-term effort.

We have to bank on the reality that China will remain and grow as a global economic and diplomatic presence.

Indeed, in what must be a long-term, strategic effort, the U.S. must marshal its resources and commit to long-term engagement to meet the challenges posed by China—now and in the future.