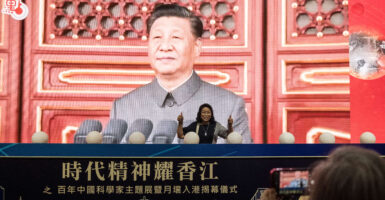 Chinese President Xi Jinping—seen here on a giant screen at the Hong Kong Convention and Exhibition Center on July 8 at an exhibition marking the 100th anniversary of the founding of the Chinese Communist Party—has worked to oust political enemies while simultaneously backing authoritarian policies to crack down on civil society. (Photo: Anthony Wallace/AFP/ Getty Images) 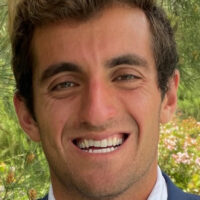 It’s no secret that the Chinese Communist Party has been looking to increase Beijing’s influence throughout the world, and a worrisome development in recent years has been China’s ability to expand that influence into Central and Eastern Europe.

A new report from the Central European Institute of Asian Studies—a global partner of the Center for International Private Enterprise—draws attention to how China has been using what the institute calls “corrosive capital” to influence policymaking in two European Union countries, the Czech Republic and Slovakia.

“Corrosive capital” is a term used to describe financing that lacks transparency, accountability, and market orientation. China has used this financing to influence public policy and political discourse in those two nations.

The report describes how the Chinese government has been able to insert itself into those nations through a banking company known as CEFC China Energy. CEFC was used to become a minority shareholder in a Czech-Slovak financing group known as J&T Finance.

Once it became a shareholder, CEFC was able to gain access and exert influence on many other industries, as well as on former and current government officials.

Two particularly worrisome sectors that China was able to influence were media and academic institutions.

By investing in various Czech and Slovak media outlets, China has been able to suppress negative press coverage while publishing pieces that present China positively.

In regards to academic institutions, the report notes  that “Confucius Institutes are the main vectors via which Chinese financing is injected into the Slovak academic sector.”

This lack of reliable data makes it difficult for U.S. policymakers to understand China’s capabilities and determine where China might pose the biggest threat to U.S. interests.

In addition, The Heritage Foundation’s annual Index of Economic Freedom, a global benchmark research project that measures countries’ economic governance, has rated the Chinese economy as “Mostly Unfree” each year since the index began in 1995.

The index notes that Chinese President Xi Jinping has worked to oust political enemies while simultaneously backing authoritarian policies to crack down on civil society. Increasing control from Beijing was the reason Hong Kong was not included in the latest version of the index.

The Central European Institute of Asian Studies report concluded that Slovakia and the Czech Republic need to respond to Chinese “corrosive capital” at all levels of society.

Supporting freedom of the press is one key to countering Chinese authoritarian tendencies. Allowing investigative journalists to shed light on corrupt Chinese practices will help alert policymakers and the public that the Chinese government is trying to increase its sphere of influence.

Civil society flourishes when individual freedom—something that does not exist in China—reigns supreme.

Countering aggressive communist regimes like China’s by shedding light on their abusive and secretive attempts to buy influence is crucial to preserving liberty throughout the globe.