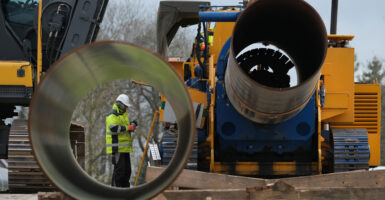 Russia already has many European countries over a barrel, literally and figuratively, for their energy supplies, a situation the Nord Stream 2 pipeline would only exacerbate. Pictured: A worker stands next to a machine bending sections of pipe to fit the terrain for the Eugal gas pipeline on March 26, 2019, near Damerow, Germany. The Eugal pipeline will transport natural gas arriving from Russia through the Nord Stream 2 pipeline nearly 300 miles across eastern Germany, from Lubmin on the Baltic Sea to the Czech border. (Photo: Sean Gallup/ Getty Images)

Advancing the Three Seas Initiative matters now more than ever. Unambiguously, the ongoing crisis in Ukraine underscores the elevated importance of the initiative for the United States and its allies in Europe.

If successful, it can do as much for Central Europe—indeed for Europe as a whole—as membership in NATO.

In the current geopolitical context, intensifying U.S. efforts to secure energy connectivity through the Three Seas Initiative is critical and deserves immediate concrete action. So does rendering practical aid to contribute to Ukraine’s self-defense and protecting supply lines to Ukraine.

Fundamentally, America’s economic relationship with the region will be exercised best through the private sector, the catalyst for real and meaningful economic transformation.

Regardless of how the Ukraine calamity plays out, it’s undeniably clear that Russia’s autocratic dominance as an energy source for most of Europe has given Moscow outsized political and economic leverage. It has been weaponized against many of America’s transatlantic allies and partners.

Indeed, in the face of Russian aggression and manipulation of energy markets, the transatlantic community needs to upgrade and secure energy supply chains. It needs a vibrant private energy sector that delivers reliable, affordable energy.

Everything needs to be in the mix of that effort, to ensure robust U.S. exports, natural gas exploration, and the facilitation of (or adoption of) greater nuclear energy.

In facilitating much-needed greater energy cooperation and connectivity independent of Russia’s influence, the Three Seas Initiative can play a vital role and must be enhanced accordingly, particularly with America becoming a more proactive anchor investor.

As noted by the Congressional Research Service, the strategic objectives of the Three Seas Initiative are in line with a number of broad U.S. security and economic goals that have received congressional support.  Members of Congress have “demonstrated a growing interest in European energy security and sought to encourage reduced energy reliance on Russia, including by promoting U.S. [liquefied natural gas] exports.”

If the Biden administration truly intends to assist Europe, Biden should move forward the “up to $1 billion” investment into Europe’s energy infrastructure through the Three Seas Investment fund, a private sector-driven investment vehicle established in 2019.

As demonstrated by the current Ukraine crisis, the Three Seas Initiative countries are like-minded and willing partners of critical importance to the United States, both politically and economically.

While each of the 12 countries has undergone different phases of economic and political developments over the past decades, by and large as a group, they have embraced a variety of free-market policies that have led to growing prosperity and stability.

Having secure, stable, and economically viable strategic partners in the Three Seas region and beyond is in America’s security and economic interest. To that end, elevating U.S. support for the Three Seas Initiative—which encompasses a strategic, long-term outlook for energy resilience and independence for Europe—is a valuable economic and security approach to counter Russia’s energy weaponization.

In fact, there’s an added urgency to the initiative.

If America were serious about helping Europe to be peaceful and prosperous, Washington would really need to gin up some momentum behind the Three Seas Initiative.

This year is likely the crucial year when America and its allies will decide whether the Three Seas Initiative remains just a diplomatic agenda or can become a serious pragmatic project.

Now is the time to act on that. It’s in the clear interest of the United States to make this year’s Three Seas Initiative Summit in Riga, Latvia, most productive.