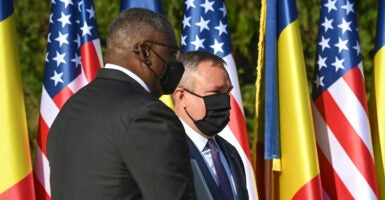 Austin noted that the two nations have built a relationship that’s based on “mutual trust, respect, and the political will to advance our common defense objectives.”

Indeed, Romania, dubbed as a “role-model NATO ally” by a senior defense official, has surpassed NATO’s goal of spending 2% of gross domestic product on defense, and 20% of that money is being spent on modernization.

As a geopolitically important and strategic member of NATO on Europe’s border with the Black Sea, Romania is a longtime friend and ally of the U.S. that shares the values of free market democracy.

The Black Sea is at an important crossroads between Europe, Asia, and the Caucasus. Many important oil and gas pipelines, as well as fiber optic cables, crisscross the sea.

Throughout the history of the region, the Black Sea has proven to be geopolitically and economically important.

From this broader and geostrategic perspective, continuing to enhance pragmatic bilateral relationships with Romania on key economic, energy, and security policy fronts is clearly in America’s national interest.

To be sure, Romania’s rise toward greater economic resilience and competitiveness has been held back by institutional shortcomings and weak spots that require further reform. According to The Heritage Foundation’s annual Index of Economic Freedom, Romania’s economic freedom score is 69.5, making its economy the 43rd-freest out of 178 countries graded in the 2021 edition of the index.

Although the Romanian economy had been rising through the ranks of the moderately free for more than a decade, it fell back a bit recently. To get back on track, the government will have to focus on improving the judicial system, strengthening anti-corruption efforts, removing rigidities in the labor market, and further modernizing the financial sector.

To that end, one of the pragmatic and strategic engagements Washington can opt for and reinforce is to continue supporting Romania through the Three Seas Initiative, while encouraging tangible results from the 5-year-old regional effort.

In his recent speech, Klaus Werner Iohannis, the president of Romania, pointed out:

In the current global context marked by the negative economic consequences of the COVID-19 sanitary crisis, the Three Seas Initiative could become an important instrument in dealing with the post-pandemic recovery of the region, through its positive contribution to the implementation of major connectivity projects and the facilitation of cooperation between our business communities. …

We should continue to look to the future through pragmatic lenses and spare no effort to enhance our connectivity hand in hand with our resilience.

In this context of mutual interest, stronger and more practical bilateral relations between the U.S. and Romania could further help to continue to pay measurable security, economic, and political dividends.

To that end, for example, including Romania in the Visa Waiver Program deserves greater attention. As The Heritage Foundation has made an unambiguous case over the years, the Visa Waiver Program pays security dividends, as countries in the program share information on serious criminals, terrorists, and lost and stolen passports with the U.S. in exchange for visa-free travel up to 90 days.

In addition, the waiver program smooths business travel and tourism between foreign countries and the U.S., and further strengthens the trans-Atlantic bond.

On the Sept. 13 occasion of the 10-year anniversary of the signing of the U.S.-Romania Joint Declaration on Strategic Partnership for the 21st Century, Washington emphasized that “our two governments recommit to serving as a bulwark for Euro-Atlantic values and to broadening and deepening the economic, cultural, and interpersonal links between our two nations,” reaffirming “the fact that we will meet our future challenges together as friends and allies.”

The time to act on that is now.