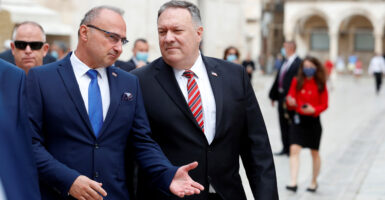 Secretary of State Mike Pompeo (center) confers with Croatian Foreign Minister Gordan Grlic Radman in Dubrovnik, Croatia, on Oct. 2, as part of his six-day trip to southern Europe, ahead of his remarks to the Three Seas Initiative on Monday in Tallinn, Estonia. Both Croatia and Estonia are members of the 12-nation initiative. (Photo: Darko Bandic/ Agence France-Presse/ Getty Images)

“The United States has skin in the game, and we look forward to every member of the Three Seas Initiative contributing as well.”

Those were the unmistakable words of Secretary of State Mike Pompeo on Monday at the Three Seas Initiative summit hosted by Estonia, highlighting that America is firmly committed to forward-looking engagement with its partners in the initiative.

Reaffirming U.S. support for the free market-based efforts “to expand energy, digital, and transportation infrastructure in a way that will improve economic security for generations to come,” Pompeo further noted:

No one can dispute this. Our way of life is synonymous with peace, prosperity, and freedom like none other. For 75 years, the United States and the free nations of Europe have cooperated to protect that. … As you move forward, you should know you will not be alone. America is with you.

The Three Seas Initiative offers a practical, economic freedom-based partnership opportunity for America. From Washington’s foreign policy perspective, the initiative—which was launched in 2016 to facilitate greater development and connectivity among 12 European Union countries around and between the Baltic, Black, and Adriatic seas—is the most significant political and economic policy initiative to emerge in Central Europe and Eastern Europe in recent decades.

The 12 countries of the initiative—Austria, Bulgaria, Croatia, the Czech Republic, Estonia, Hungary, Latvia, Lithuania, Poland, Romania, Slovakia, and Slovenia—have been working closely with the U.S. to promote links among nations in this critical region by supporting infrastructure, energy, and digital interconnectivity projects.

The Three Seas Initiative nations are like-minded and willing partners of critical importance to the United States, both politically and economically.

While each of the 12 countries has undergone different phases of transition over the past decades in terms of institutionalizing political freedom and economic liberty, by and large they as a group have turned away from the collectivist philosophies of socialism and communism and embraced a variety of free market policies that have led to growing prosperity and stability.

Having secure, stable, and economically viable strategic partners in the three seas region is in America’s security and economic interest.

In deepening engagement with the United States, the Three Seas Initiative countries should implement more reforms that open themselves further to international investment and strengthen their institutions.

For America, the task of advancing economic freedom and an enabling business environment in the region must include committed economic statecraft that creates a more inviting playing field for American companies and private investors, as well as ensuring U.S. leadership in market-opening and high-standard rule-making.

Obviously, Washington cannot and will not be able to provide the partners with the political will that they need to continue the transformation of their economies according to free market principles.

Nonetheless, by offering its encouragement, ideas, and catalytic financing, the U.S. can ensure that its interests are taken into account.

Fundamentally, of course, America’s economic relationship with the region will be exercised primarily through the private sector, the engine of real and meaningful economic transformation.

Capitalizing on all opportunities to deepen practical trade and investment relations is in the mutual interests of Washington and the countries of the three seas region.

The successful fifth Three Seas Initiative summit shows that the United States and the partner countries remain steadfast in their determination to ensure that the strategically focused transatlantic partnership will prosper in the years ahead.