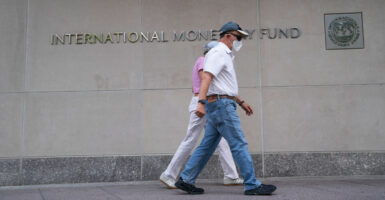 Corruption is a serious threat to freedom. One of the main costs of corruption is the loss of economic freedom—that is, the loss of the ability of individuals to decide for themselves how best to achieve their dreams and aspirations and those of their families. In the wake of the global COVID-19-related recession, protecting economic freedom is paramount.

While corruption had been a grave problem in many parts of the world before the ongoing coronavirus pandemic, the current crisis has elevated the importance of tackling corruption and institutionalizing stronger governance and accountability.

A recent commentary by economists from the International Monetary Fund underscored that “corruption, the abuse of public office for private gain, is about more than wasted money: it erodes the social contract and corrodes the government’s ability to help grow the economy in a way that benefits all citizens.”

In the context of the pandemic, they highlighted three reasons why rooting out corruption is critical:

First, governments around the world are playing a bigger role in the economy to combat the pandemic and provide economic lifelines to people and firms. This expanded role is crucial but it also increases opportunities for corruption.

Second, as public finances worsen, countries need to prevent tax evasion and the waste and loss of funds caused by corruption in public spending.

Third, crises test people’s trust in government and institutions, and ethical behavior becomes more salient when medical services are in such high demand. Evidence of corruption could undermine a country’s ability to respond effectively to the crisis, deepening the economic impact, and threatening a loss of political and social cohesion.

In a world characterized by social and cultural diversity, practices regarded as corrupt in one place may simply reflect traditional interactions in another. Of far greater concern is the systemic corruption of government institutions by such practices as bribery, nepotism, cronyism, patronage, embezzlement, and graft, which remain prevalent in many developing countries.

Though not all are crimes in every society or circumstance, these practices erode the integrity of government and thus trust from the public wherever they are practiced. By allowing some individuals or special interests to gain government benefits at the expense of others, they are grossly incompatible with the principles of fair and equal treatment that are essential ingredients of an economically free society.

Also notable is that there is a direct relationship between the extent of government intervention in economic activity and the prevalence of corruption.

In particular, excessive and redundant government regulations, typically exacerbated by the lack of spending oversight and overall fiscal transparency, provide ample systemic opportunities for bribery, graft, and other corrupt practices that are detrimental to economic growth and development.

The current heath and economic turmoil has created a need to sharpen our focus on governance and transparency, particularly given the pandemic’s already devastating human and economic costs.

Taking practical steps to eliminate corruption while advancing transparency requires a joint effort between the public sector, civil society, and the private sector. Now is the time to act.