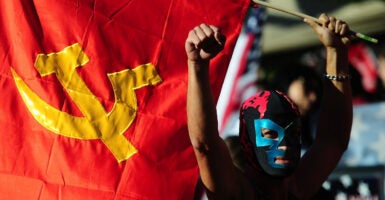 As documented in The Heritage Foundation’s annual Index of Economic Freedom, societies with higher degrees of economic freedom thrive because they capitalize more fully on the ability of individuals to innovate and prosper. Pictured: A demonstrator takes part in a May Day demonstration in New York, May 1, 2013. (Photo: Emmanuel Dunand/AFP/Getty Images)

So said national security adviser Robert O’Brien in a major policy speech June 24 to a group of business executives at the Arizona Commerce Authority, adding:

In marked contrast to Marxist-Leninist ideology, individuals in a free market democracy control the fruits of their own labor and initiative. They are empowered and entitled to pursue their dreams by means of their own free choice.

Indeed, the discussion of freedom to choose has at its core consideration of the relationship between the individual and the state. As a vital component of human dignity, autonomy, and personal empowerment, liberty is valuable as an end unto itself.

Just as important, however, is the fact that freedom provides a proven formula for economic prosperity and societal progress. It’s ultimately about moving societies forward for the benefit of a greater number of people.

As documented in The Heritage Foundation’s annual Index of Economic Freedom, societies with higher degrees of economic freedom thrive because they capitalize more fully on the ability of individuals to innovate and prosper.

Economies rated “free” or “mostly free” enjoy incomes that are more than twice the average levels in all other countries and more than five times higher than the per capita gross domestic product of “repressed” economies.

The pursuit of, and commitment to, free market policies clearly pave a proven way to more vibrant growth and greater prosperity.

In fact, history tells us that the human spirit thrives on fairness, opportunity, transparency, and liberty.

We were vividly reminded of this truth by the collapse of the Soviet Union three decades ago. Yet there are those who persist in attacking individual freedom in the name of collectivism or socialism.

These false and outmoded ideologies may still have emotional and political appeal for some. However, the economic and social consequences when they become the touchstones of government policy are unambiguous; namely, poverty, deprivation, and oppression.

To build a better world, we must have the courage to make a new start. We must clear away the obstacles with which human folly has recently encumbered our path and release the creative energy of individuals.

We must create conditions favourable to progress rather than ‘planning progress.’ … The guiding principle in any attempt to create a world of free men must be this: A policy of freedom for the individual is the only truly progressive policy.

That observation resonates astonishingly well in today’s world. It would be a tragic mistake to abandon our commitment to freedom in a time of uncertainty. That freedom has unequivocally made our society strong, vibrant, and flourishing.

It’s time to revitalize our commitment to individual freedom and pursue a policy of liberty.