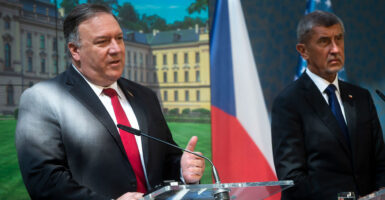 U.S. Secretary of State Mike Pompeo stands with Czech Prime Minister Andrej Babis (right) at an August 12 press conference in Prague, Czech Republic. In his “Securing Freedom in the Heart of Europe,” Pompeo told the Czech senate that America will always be with the Czech Republic as a champion of human rights and freedom. (Photo: Gabriel Kuchta/Getty Images)

In a recent speech to the senate of the Czech Republic

, Secretary of State Mike Pompeo highlighted the importance of human rights and liberty to world order:

Today you should know that after three decades of freedom, we can see the blessings of liberty here in the Czech Republic. Earlier today I met with a group of startup leaders.  Their nimble enterprises—once unthinkable under Soviet commissars—are bringing value to both the United States and the Czech economies.

But maybe more importantly, they reflect how the rich soil of liberty yields a plentiful harvest in human flourishing when freedom is tolerated.

I’ll close by quoting one more time President [Václav] Havel: “The idea of human rights and freedoms must be an integral part of any meaningful world order.”

Pompeo summed up his remarks, entitled “Securing Freedom in the Heart of Europe,” by making it clear that “America will be with you as we champion those precious human rights and freedoms.”

Indeed, it is in America’s foreign policy interest to remain the world’s strongest advocate for freedom.

Following the inaugural report by the State Department’s Commission on Unalienable Rights, a recent Heritage Foundation paper made the case for economic freedom as the linchpin of indivisible human rights. The liberation of individuals from government economic regulation and control has certainly proven to be the best path to rapid economic growth and societal development.

But also, when citizens are empowered economically, they gain the independence and means to demand and effectively preserve their civil and political rights through democratic action.

To that end, it is more important than ever to keep the vital linkage between human rights and economic freedom as a critical pillar of foreign policy. Working closely with like-minded and willing allies in efforts to defend individual freedom and civil society should be the central component of U.S. foreign policy toward Europe.

Preserving and advancing economic freedom and human rights is the best time-tested countermeasure to coercive collectivism and authoritarianism. If we are going to continue to safeguard societies from errors that have brought nothing but misery throughout history, however, America, together with her like-minded and willing allies, must win the ongoing battle of ideas against non-democratic, authoritarian approaches.

The cause of freedom has swept the world over the past century. As the 21st century progresses, freedom’s allies must stand up together and confront those who would restore the failed ideologies of the past.

As Pompeo noted in his Prague speech, “the resolve of freedom-loving people all over the world is to defend their way of life, and it is growing.” In that spirit, America must guard democratic values and work side by side with our allies, new and old, around the globe.