Q&A: What You Need to Know About DACA 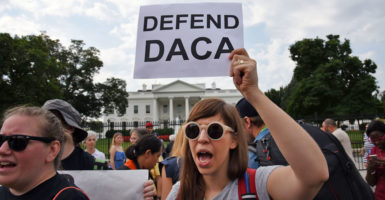 A protester holds a sign during a pro-DACA rally outside the White House on Sept. 5. (Photo: Douliery Olivier/Sipa USA/Newscom)

Reports have surfaced this week that President Donald Trump is negotiating a deal with Democratic leaders to replace Deferred Action for Childhood Arrivals, the immigration policy put in place by President Barack Obama in 2012.

The Daily Signal sat down with Hans von Spakovsky, manager of the Election Law Reform Initiative and senior legal fellow at The Heritage Foundation, to get full details on DACA and its continued role in today’s negotiations.

Right now, President Trump and Congress are dealing with the ramifications of DACA. What did DACA actually do?

DACA was implemented through a memorandum issued by the secretary of the Department of Homeland Security on June 15, 2012. It applied to aliens who illegally entered the U.S. before the age of 16, were under the age of 31, had “continuously” resided in the U.S. since June 15, 2007, and were in school, graduated, or honorably discharged from the military.

DACA provided a period of deferred action (a promise that the alien would not be deported) as well as access to certain government benefits.

Illegal aliens were considered eligible even if they had been convicted of two misdemeanor crimes.

There was also no requirement that the alien speak English fluently. The Center for Immigration Studies estimates that 24 percent of the DACA-eligible population were functionally illiterate in English, and another 46 percent had only “basic” English.

The period of deferred action was initially for two years, but that period was extended to three years by a second Homeland Security memorandum on Nov. 14, 2014.

In 2014, President Obama attempted to implement a second program, the Deferred Action for Parents of Americans and Lawful Permanent Residents (or DAPA), which provided similar benefits for aliens who were adults when they illegally entered the U.S.

This program was stopped by a lawsuit filed by 26 states after a federal court issued a nationwide injunction, holding that providing such benefits to illegal aliens was beyond the power of the president.

What kinds of benefits are DACA recipients eligible for?

Illegal aliens qualified under the DACA program (approximately 800,000 initially) were able to receive work authorizations that permitted them to be legally employed. They could participate in the Social Security and Medicare programs, as well as receive federal tax benefits such as the earned income tax credit.

Aliens also used their qualification under the DACA program to force states to issue them driver’s licenses.

In a recent tweet, Trump implied that DACA recipients are serving in the military. Is that correct? Are they allowed to serve?

Yes, there are a limited number of DACA recipients serving in the military. The Department of Defense implemented the “Military Accessions Vital to National Interest” program to recruit “legal aliens” with special skills into the armed forces.

This program allowed any aliens “granted deferred action” by Homeland Security under DACA to apply to join the military on a case-by-case basis.

Last week, Trump made headlines by rescinding DACA, giving it a six-month phaseout. What did that decision mean for DACA recipients?

According to a memo issued on Sept. 5 by the acting secretary of the Department of Homeland Security, Elaine Duke, no new applications for DACA benefits will be considered after Sept. 5.

However, Homeland Security will not terminate DACA benefits for any illegal alien who is currently qualified under the program and whose benefits “will expire between the date of this memorandum and March 18, 2018.”

What will happen to DACA recipients if six months pass without congressional action?

As of now, the DACA program and all benefits provided under the program to illegal aliens will be terminated in six months—on March 18, 2018—unless President Donald Trump provides another extension of the program or Congress passes a bill addressing the issue.

Are DACA recipients able to get extensions or renewals? If so, what does that look like?

Yes. According to the Sept. 5 memorandum, Homeland Security will “adjudicate—on an individual, case-by-case basis—properly filed pending DACA renewal requests and applications for Employment Authorization Documents” from current beneficiaries who have been accepted into the program as of Sept. 5.

Homeland Security will do the same for current beneficiaries whose benefits will expire before March 18, 2018, and who “have been accepted by the department as of Oct. 5, 2017.”

Trump has been negotiating with the Democrats on a legislative solution to replace DACA. What is the solution?

As a sovereign nation, we have the right to decide who comes to the U.S. Enforcing our immigration laws encourages people to come to the U.S. legally and discourages illegal immigration.

The DACA program helped spur a significant increase in illegal border crossings. Amnesties, such as the amnesty granted in 1986 to illegal aliens in the Immigration Reform and Control Act, simply encourage even more illegal immigration.

The U.S. should take a step-by-step approach to our immigration challenges. Start with non-negotiable responsibilities of the federal government such as border security and enforcement of immigration laws.

Then turn to improving the legal immigration system so that it better serves U.S. interests. Once that is done, the country can figure out what to do with those still living here illegally.

The administration should not agree to a compromise where Congress grants amnesty to DACA beneficiaries only in exchange for a border wall and enhanced border security. Those things should be non-negotiable responsibilities of the federal government.