Visa Waiver Program Is Good for Poland, Great for US 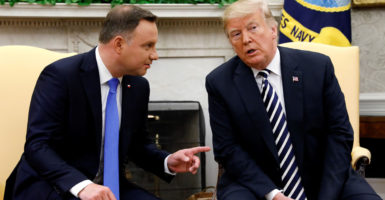 President Donald Trump listens during a meeting with Poland's President Andrzej Duda in the Oval Office of the White House on Sept. 18. (Photo: Kevin Lamarque/Reuters/Newscom)

Arya Shatraw is a member of the Young Leaders Program at The Heritage Foundation.

Poland has been a crucial U.S. ally since the collapse of the Iron Curtain.  One way for the U.S. to further strengthen that alliance, as well as improve U.S. security and economic vitality is the Visa Waiver Program.

Poland, whose president, Andrzej Duda, met with U.S. President Donald Trump Tuesday, is a prime candidate to be admitted to this program, which currently includes 38 other nations.

Citizens of a Visa Waiver Program country may travel to the U.S. for up to 90 days without a visa. This benefit is given to countries who participate in intelligence sharing about known or suspected terrorists, serious criminals, and lost and stolen passports, as well as other security measures. As a result, the U.S.’ ability to vet visitors has significantly improved.

Participating countries are also required to have a visa refusal rate of less than 3 percent, although previously the secretary of the Department of Homeland Security was able to allow a refusal rate of up to 10 percent. Visa Waiver Program countries also provide U.S. citizens with the ability to travel to their country without a visa. By increasing travel and tourism, there are also significant economic benefits.

One way in which the program can be improved is to reconsider which metrics we use to allow entry to the program. Rather than using visa refusal rates, visa overstay rates are arguably a better indicator of a potentially responsible member.

These metrics are supposed to prevent a country from entering the program if the U.S. is worried that many people from that country will become an overstay, illegally residing in the U.S. If this is what the U.S. is trying to combat, then it is more apt to use the visa overstay rate than just the visa refusal rate.

For example, a country like Poland has a 5.9 percent visa refusal rate, above the 3 percent threshold, but has a relatively low visa overstay rate of only 1.17 percent. So long as a country has a reasonably low refusal rate of less than 10 percent, a low overstay rate is a better indicator of a good candidate country.

Such a shift toward overstay rates would allow countries like Poland and Croatia to join the program and put other friends like Romania close. There are multiple bills being floated around in Congress that might expand the program along these or similar lines.

The Visa Waiver Program is good for U.S. security, prosperity, and our relationship with our allies. Duda will certainly bring up this issue in his meeting with Trump. The president and Congress should show their commitment to Poland by extending the Visa Waiver Program to this great ally of ours.