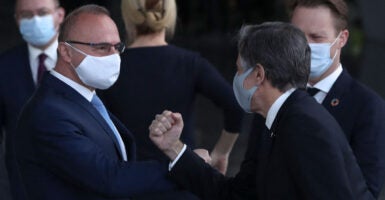 Secretary of State Antony Blinken’s nomination of Croatia to join the Visa Waiver Program is a long overdue but welcome move that will advance U.S. security and strengthen bilateral ties with an important NATO ally in the Balkans.

The Visa Waiver Program allows citizens of approved countries to come to the U.S. without a visa for up to 90 days, and a travel authorization that is good for two years. In exchange, the 39 member nations share information with the U.S. on serious criminals, terrorists, and lost and stolen passports.

In addition to the security dividends, the Visa Waiver Program smooths business travel and tourism between foreign countries and the U.S. and further strengthens the transatlantic bond.

Croatia’s addition to the Visa Waiver Program, announced Monday by Blinken, is the first since Poland’s inclusion in November 2019. These recent expansions of the program benefit both the U.S. and our Croatian and Polish allies.

The symbiotic nature of the Visa Waiver Program further highlights the need for the U.S. to evaluate alternative eligibility criteria, which will allow remaining NATO allies—including Bulgaria and Romania—to take part.

To be invited to join, countries must make certain improvements, including those that help ensure passport-control practices are secure. For instance, the issuance of safe, machine-readable biometric e-passports (which are physical passports with a microchip).

Still, a nation’s final inclusion in the Visa Waiver Program, even after meeting all the criteria, is at the discretion of Washington.

The Biden administration’s decision to nominate Croatia is the correct one.

Some U.S. allies such as Bulgaria (12.52%) and Romania (10.14%) continue to have visa refusal rates well above 3%. A far better metric to consider is the visa overstay rate, which provides a clearer assessment of overstay risk, since that is exactly what it measures.

Both Bulgaria and Romania have minute visa overstay rates that are similar and in some cases better than those of nations already in the Visa Waiver Program.

Congress should allow the secretary of the Department of Homeland Security, which oversees the program, the latitude to invite nations to join with a slightly elevated visa refusal rate, provided that they have a concurrently small visa overstay rate.

Congress also should evaluate alternative eligibility that considers other national security objectives, such as defense spending by NATO members (Romania meets both NATO spending benchmarks, Bulgaria meets one of two).

Croatia is a valuable U.S. ally, and its inclusion in the Visa Waiver Program helps further cement bilateral ties as well as improves U.S. security.

While laudable, Croatia’s long overdue inclusion shines a brighter light on the glaring omission of Bulgaria and Romania, which remain on the outside looking in. It’s an omission that Congress and the Biden administration would do well to rectify swiftly.