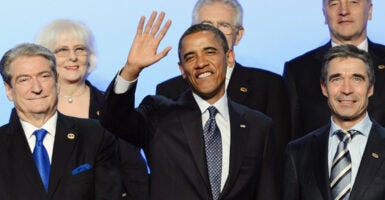 The U.S. sanctions recently slapped on Albania’s former prime minister for corruption represent the latest in a string of events highlighting shortfalls in government integrity in the Balkans.

U.S. Secretary of State Antony Blinken explained that Sali Berisha, Albania’s prime minister from 2005 to 2013, was “involved in corrupt acts.” Blinken specified “misappropriation of public funds and interfering with public processes, including using his power for his own benefit and to enrich his political allies and his family members.”

The sanctions that Blinken announced May 19 make Berisha the fourth high-ranking Albanian official to be prohibited from entering the United States because of corruption allegations.

The entire Balkan region, with the exception of Slovenia, is plagued with corruption. Here are just a few examples:

—Bulgaria’s ruling party fell from power last month after a year of widespread public outcry against government corruption. Former Prime Minister Boyko Borissov, who served his third term from 2017 to 2021, long has been alleged to be connected with organized crime.

—In 2019, the leader of Romania’s Social Democrat Party, Liviu Dragnea, was sent to prison for using a state agency to pay members of his party for fake jobs. Since then, Dragnea has faced other corruption charges, including allegations that he organized a criminal group to steal money from government projects. Dragnea had been regarded as one of the most powerful actors in Romanian politics.

—In 2014, Montenegro accepted a $1 billion loan from the Chinese government to build a transnational motorway intended to connect the southern and northern parts of the country. After seven years, less than 25% of the road has been completed and the small Balkan country has run out of funds to finance the project. Public outcry has begun, and many believe that the government’s lack of transparency indicates widespread corruption.

Dishonest government practices inhibit the Balkans’ ability to prosper economically. The Balkans region in southeastern Europe consists of 10 countries, the more prominent of which include Serbia, Romania, and Bulgaria. Although part of Europe, the Balkans are far less prosperous than other countries there.

The average gross domestic product per capita for the European region excluding the Balkan states, converted to U.S. dollars, is $44,173. The average GDP per capita of the Balkans is $23,041, a discrepancy of $21,132.

Research shows that implementing market-oriented reforms that extend economic freedom can improve individual economies. The Heritage Foundation’s annual Index of Economic Freedom contains a comprehensive look at each of 184 countries. The index averages 12 subvariables to compile an overall score for each country.

Many Balkan countries score well on numerous indicators in the index. Almost every Balkan country lags far behind most of Europe in one indicator, however: government integrity.

The Balkan region has made many strides over the past two decades. Gross domestic product has increased. Life expectancy has improved. Educational attainment has risen.

If the various governments of the Balkans care about improving the livelihood of their citizens, they need to create an environment of economic freedom and opportunity. The first step is to rid themselves of the dark clouds of corruption.