Why Government Corruption Is the True Enemy of Economic Freedom 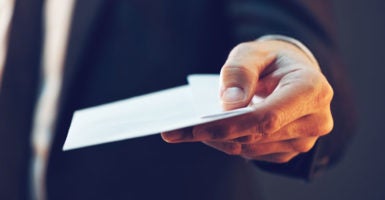 That’s how many people are currently living in corrupt countries, according to the most recent edition of an annual study by Transparency International, the Corruption Perceptions Index 2017.

The index ranks 180 countries and territories for their perceived levels of public-sector corruption through the eyes of experts and business people in those countries.

More than two-thirds of the 180 ranked countries and territories fall closer to “highly corrupt” on Transparency International’s scale than to “very clean.”

Extracting arbitrary taxes, demanding bribes, or requiring payment for protection from physical harm are among the corrupt abuses by those in power that are infringements on economic freedom.

By contrast, policies that promote economic freedom are among the best ways to eliminate opportunities for these types of corrupt practices. If government officials do not have to be open about their actions, they can enrich themselves while ignoring or squelching the economic freedom of others.

That’s one reason why protections of journalistic freedom and the engagement of civil society are so important.

>>> Why a Free Press Is Actually Good for the Economy

This year, New Zealand and Denmark ranked highest in the Corruption Perceptions Index—meaning, they were rated as the least corrupt. No surprise there, because they also score high on The Heritage Foundation’s Index of Economic Freedom.

Syria, South Sudan, and Somalia rank worst in corruption and could not even be ranked in terms of economic freedom because of ongoing violence and unrest.

The U.S. ranks 16th and 18th in Transparency International’s index and in the Index of Economic Freedom, respectively, lagging behind Canada in the Americas region in both indexes.

Freedom from corruption is something that cannot be taken for granted if freedom is to endure.

As President Ronald Reagan often said, “Freedom is never more than one generation away from extinction.” Promoting economic freedom to prevent corruption is one of the best ways to ensure that the benefits of freedom endure for generations ahead.