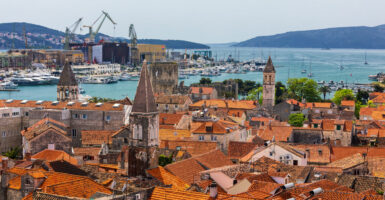 The Three Seas Initiative is dedicated to promoting development and connectivity among 12 European Union countries around and between the Baltic, Black, and Adriatic seas. It is in the interest of the U.S. to support this initiative. Pictured: The city of Trogir in Croatia, by the Adriatic Sea. (Photo: DaLiu/Getty Images)

In a recent forum between the U.S. and European Union, Poland’s Prime Minister Mateusz Morawiecki appealed for greater U.S. support for the Three Seas Initiative, commonly known internationally as the 3SI. Morawiecki underscored the importance of the 3SI in the context of further enhancing the transatlantic and strategic relationship:

[T]his new dimension, which we have created together with other countries of Central Europe, called Three Seas, is still underestimated by our friends in the United States … [T]he investments from the United States at this juncture is so much needed, also to stop not only the Russian aggression, but also more silent but equally challenging Chinese policy vis-à-vis this part of the world.

The 3SI—launched in 2016 to facilitate greater development and connectivity among 12 European Union countries around and between the Baltic, Black, and Adriatic seas—is the most significant political and economic policy initiative to emerge in Central and Eastern Europe in the past half-century.

Indeed, one of the most pragmatic and strategic engagements Washington can opt for is to continue supporting the region through the 3SI, while encouraging tangible results from the 5-year-old effort. It would be an unfortunate policy blunder for the Biden administration to be passive about the regional initiative, which is exceedingly popular in Eastern Europe and attracting more interest from the American business community.

The 12 countries of the 3SI are Austria, Bulgaria, Croatia, the Czech Republic, Estonia, Hungary, Latvia, Lithuania, Poland, Romania, Slovakia, and Slovenia. The 3SI is designed to promote connectivity among nations in this critical region by supporting infrastructure, energy, and digital interconnectivity projects, with the ultimate goal of strengthening their security and economic vitality.

While each of the 12 countries has undergone different phases of transition over the past decades, by and large they as a group have turned away, dramatically so, from the collectivist philosophies of socialism and communism and have embraced a variety of free-market policies that have led to growing prosperity and stability.

Having secure, stable, and economically viable strategic partners in the Three Seas region is in America’s practical security and economic interest.

Washington can engage at the technical and practical level in a way that enables countries to advance their economic development. Fundamentally, America’s economic freedom partnership with the region will be exercised best through the private sector: the catalyst for real and meaningful economic transformation.

The U.S. government can be flexible in its approach—not needing formal agreements in every case. The U.S. and countries in the region have a mutual interest, for instance, in helping small and medium-size businesses, including those in the financial sector, grow and compete regionally as well as globally. Positive actions in this regard can be taken by the U.S. and individual 3SI countries on independent timetables.

Going forward, as Poland’s prime minister reminded policymakers in Washington, the 3SI deserves stronger U.S. government support and elevated strategic engagement. Grasping and capitalizing on all opportunities to further deepen practical trade and investment relations is in the mutual interests of Washington and countries in the Three Seas region.

Now is the time to act on that and operationalize the Three Seas Initiative.