Poland: A Valuable Ally for America 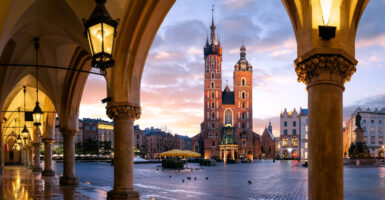 National security adviser Jake Sullivan underlined Washington’s clear interest in reinforcing the bilateral relationship between the United States and Poland during his first official call with senior government officials of Poland on Feb. 3.

This commitment to cooperation—particularly in the context of “working together on shared foreign policy priorities, including Russia and China”—is an encouraging sign.

Indeed, Poland, a geopolitically important and strategic member of the North Atlantic Treaty Organization on Europe’s border with Russia, is a long-time close friend and ally of the United States.

As a net security contributor and a valuable partner of Washington in Europe, Warsaw continues to be an important gateway for America’s economic and security engagement with Central and Eastern European countries.

Poland sensibly urged the European Union “not to rush things and to cooperate more with Washington” as it developed a comprehensive agreement on investment with China. Polish minister for foreign affairs, Zbigniew Rau, pointed out that “we need more consultations and transparency [to bring] our transatlantic allies on board.”

He further noted that “a good, balanced deal is better than a premature one.”

On the wider trade and investment front, Poland has an increasingly open and growing economy—the EU’s sixth-largest, in fact, thanks in part to a vibrant manufacturing sector. Unfortunately, due to the pandemic, Poland recorded its first economic contraction last year since 1991, when the country embarked on crucial transformation from a centrally planned economy to a more market-driven system.

However, its overall economic resilience and competitiveness is undimmed. For more than a decade, the Polish economy has been climbing the ranks of The Heritage Foundation’s annual Index of Economic Freedom. Poland ranks 46th out of 180 countries in the latest edition of the index, with its overall score having increased by 1.3 points.

To be sure, Poland’s rise toward greater economic freedom has been held back by institutional shortcomings and weak spots that require further reform. However, bearing in mind how long and severely the country’s economic livelihood and civil society were held back under communism, the progress achieved is outstanding.

In a broader perspective, Poland is a key pillar of security in Europe. Enhancing bilateral relationships with Poland on key economic and security policy fronts is clearly in America’s national interest.

To that end, one of the pragmatic and strategic engagements Washington can opt for is to continue supporting Poland through the Three Seas Initiative, while encouraging tangible results from the 5-year-old effort.

It would be a serious policy blunder tor the Biden administration to disown the program, which is exceedingly popular in Eastern Europe, and enjoys strong support from the American business community.

As then-Deputy Secretary of State Antony Blinken underscored in his 2014 Warsaw speech, “for our own two nations, the heritage we share runs deep into our history, comes alive in our communities, and energizes the principles that unite us.”

As secretary of state, Blinken now has a unique opportunity to capitalize on that unique heritage to further deepen practical economic and security cooperation, which is in the mutual interests of Washington and Warsaw.