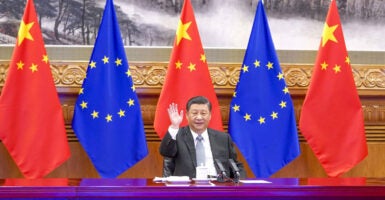 The new comprehensive agreement on investment between the EU and China is a political win for Beijing. Pictured: Chinese President Xi Jinping meets with EU leaders via video link in Beijing to complete investment agreement negotiations on Dec. 30. (Photo: Li Xueren/Xinhua/Getty Images)

The European Union and the People’s Republic of China reached a comprehensive agreement on investment Dec. 30, and it has already elicited a storm of disapproval from advocates of transatlantic cooperation in both the U.S. and Europe.

For good reason. Instead of forging a common course of action on the China challenge, Brussels used it as leverage to secure short-term commercial advantage. The Chinese, of course, were more than willing to accommodate.

The European Union and China had been looking to complete a bilateral investment agreement before the end of 2020. Beijing’s sudden flexibility on the terms of the agreement was clearly part of an effort to preempt more robust transatlantic cooperation in confronting China.

The EU is already a significant investor in China. Europeans have invested as much as $181 billion in China, with Germany being the largest investor.

The deal is a political win for China at a time when its diplomatic relationships around the world are worsening. Beijing has become increasingly belligerent toward countries that want to shine a light on Chinese human rights abuses, such as the use of forced labor, or who want to investigate the origins of COVID-19.

It also hands Beijing a major strategic boost after suffering a series of setbacks in Europe, with several governments reconsidering their earlier willingness to allow Huawei to develop their 5G networks.

The U.S. and its European allies share a set of values, and vast array of interests. This is indisputable. They understand each other to a degree that only people born of the same political culture can.

The U.S. and European countries have contemporary habits of cooperation—as exemplified by NATO, for instance—deeper than the U.S. has ever had anywhere else in the world. It is in the interest of both sides of the Atlantic to bring these assets to bear in their strategic competition with China.

Reaching transatlantic consensus on China will be challenging. It will require the U.S. to utilize relationships throughout the capitals of EU member states, in Strasbourg, and in Brussels itself to convince continental Europe of the value of cooperation.

The United States has many friends in Europe who see the China challenge the same way they do. And its diplomats know their way around European capitals better than the Chinese.

Washington has been spearheading international efforts to shed light on China’s belligerence and abusive trade practices on several fronts. Sadly, the recent comprehensive agreement on investment clouds efforts to make common cause with Europe in areas of shared interest.

It is time for our European allies to stand with the United States in advancing a robust transatlantic approach toward China—one that holds Beijing to account for its anti-market trade practices, its dismal track record on human rights, its destruction of freedom in Hong Kong, its increasingly aggressive approach toward the free world, and its refusal to operate in a transparent manner over the outbreak of COVID-19.