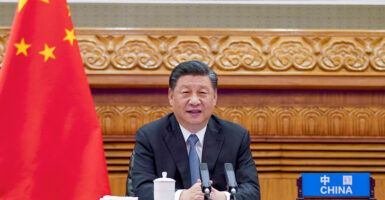 Discussions among U.S. policymakers and like-mined partners around the world need to focus on the challenges should China succeed in growing its political and economic power and influence. Pictured: In Beijing, Chinese President Xi Jinping participates in a video summit April 16 with French President Emmanuel Macron and German Chancellor Angela Merkel. (Photo: Li Xueren/ Xinhua/Getty Images)

A former deputy managing director of the International Monetary Fund recently warned that China would face huge structural problems in its economy as Beijing falls back on its old playbook to try to grow its economy.

We can’t disagree with this timely, candid assessment by former IMF senior economist Zhu Min. “In 2021, structural reform is the most important thing for China,” Zhu emphasized. “If we keep on the 2020 path, we have the risk of returning to the old model, which is what we don’t want to see.”

The IMF has long argued that China’s unusually “heavy dependence on investment in infrastructure and property” has resulted in an unbalanced economy.

As a matter of fact, China has long paid lip service to reforming its economy, particularly its bloated, inefficient state-owned or state-supported enterprises, but in practice, reforms have rarely panned out.

In recent years, pro-market reform has slowed and even derailed in some sectors.

In 2013, the Chinese Communist Party’s third plenum outlined how the state would supposedly reduce control of commercial state-owned enterprises, but at the same time push key industries that contribute the most to China’s economic development and national security to focus on so-called core areas of their businesses—in other words, the priorities of the Chinese Communist Party.

As in the past, businesses can only operate in China if the party approves, and only to further the party’s goals.

The economic freedom that does exist in the world’s second-largest economy is severely lacking in depth and breadth across the country. China’s economic freedom has barely grown over the past 27 years.

Worse, various policies that China’s leaders have been enacting for more than a decade now are compounding the very problems they are meant to fix. More than ever, the Chinese Communist Party has been attached to capitalizing on greater political control, even at the cost of long-term economic development.

For the party, political stability is more important than the economy, and economic development is controlled to fit the party’s political agenda.

Indeed, that ever-growing control—which stifles the intellectual, social, cultural, and economic vigor of the Chinese people—is at the core of all the issues that Washington’s new administration must deal with in charting its course vis-a-vis the communist regime.

To be more effective, however, Washington must factor in a greater understanding of the Chinese economy, as well as expose its grave lack of transparency and accountability.

As China continues its rise, the actions of the Communist Party have implications across the globe, and the need for transparency matters more than ever. Indeed, that’s why in 2020, The Heritage Foundation launched the China Transparency Project to facilitate a global campaign to systematically expose the party’s behavior.

Ongoing discussions among U.S. policymakers and other like-mined partners around the world need to focus on the challenges should China succeed in growing its political and economic power and influence.

But equally, as Zhu has noted, there is also the chance that China might fail, and that, too, presents multifaceted risks the United States and the world must be ready to confront.