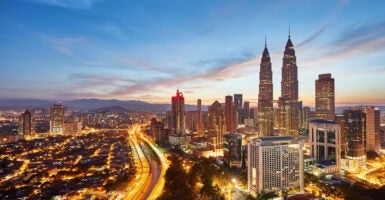 Washington’s Indo-Pacific Transparency Initiative will go a long way in nurturing growth, stability, and the rule of law among U.S. allies in this pivotal region. Pictured: The sun rises on Kuala Lumpur in Malaysia, which is the 24th-freest economy in the world. (Photo: Fakrul Jamil Photography/Getty Images)

The Indo-Pacific region is going to be a critical foreign policy theater for the United States and its partners in the coming years. The U.S. must make it a priority to uphold free-market principles and economic freedom in the region in order to nurture and maintain our partnerships with Indo-Pacific allies. Washington’s Indo-Pacific Transparency Initiative will be a vital part of that effort.

The initiative, formulated two years ago, focuses on promoting “civil society, rule of law, and transparent and accountable governance” across the Indo-Pacific region.

Supporting good governance is essential to ensuring a free and open Indo-Pacific. The region is the most populous and economically dynamic part of the world, containing over half of the world’s population. Encouraging a robust economic environment, which offers opportunity and prosperity to this population, is not only a matter of foreign policy—it is also key to national security. America continues to be an important stakeholder in the region.

To maintain its position, the U.S. must encourage the free flow of capital, goods, services, and ideas throughout the Indo-Pacific. Implementing such forward-looking policies would generate and reinforce the economic dynamism and innovation that will lead to an expanded network of free markets and greater economic ties among like-minded and willing partners in the region.

In what must be a long-term, strategic effort, the U.S. needs to marshal its resources and continue its committed engagement to meet the opportunities and challenges of the Indo-Pacific.

To do this, the Indo-Pacific Transparency Initiative incorporates over 200 programs developed by a range of U.S. government agencies, which focus on a range of issues: anti-corruption and fiscal transparency, democracy assistance, youth and emerging leader development, media and internet freedom, and protecting fundamental freedoms and human rights.

It is notable that what sets the region apart from other regions is the extraordinary disparity in levels of economic freedom and political freedom from country to country.

According to The Heritage Foundation’s 2020 Index of Economic Freedom, eight of the world’s 30 freest economies—Singapore, Hong Kong, Australia, New Zealand, Taiwan, Malaysia, South Korea, and Japan—are in the Indo-Pacific region. However, most other countries in the region, including Sri Lanka, China, and India, remain “mostly unfree” and rank in the bottom half of the 180 countries assessed in the index.

The region is also home to a remarkable mix of political systems, from free-market democracies to communist dictatorships. More than half of the countries in the region remain politically unfree, and anti-democratic forces have been on the march in recent years.

Despite the region’s high degree of disparity in the economic and political systems, a rules-based international order—resting on the principles of good governance, the rule of law, and free markets—has served it quite effectively in recent decades. The inherent appeal of everything those economic gains bring provide a shining example to the region’s less free member states.

The United States and its allies in the region have made the strategic choice to defend the principles of the free-market, rules-based order in the region over the past decades. That choice must now be reinforced with stronger commitment and concrete action.

The United States cannot make the decision for Asia whether or not to uphold and defend the rules-based order. Nevertheless, America can make the decision an easier one by demonstrating continuing leadership in the region and by remaining actively involved as a partner through economic and commercial arrangements.

The Indo-Pacific Transparency Initiative is a positive example of how Washington can act to increase the coherence and effectiveness of its engagement with the region.