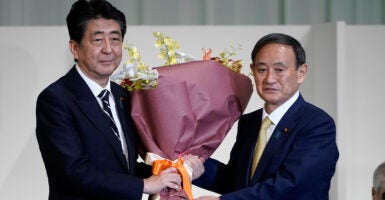 Suga likely will have his hands full for the next year, or at least until the next election, as he tries to balance Japan’s economic recovery, growing diplomatic tension between the U.S. and China, and hosting a delayed Summer Olympics.

As in most other countries right now, Japan’s economy is struggling through a coronavirus-induced recession, contracting by 7.9% in the second quarter (April through June).

But Japan’s economic woes started as early as last year, with the pandemic only making matters worse.

Japan’s economy took a downturn in the latter half of 2019, as Japan increased its consumption (or sales) tax in October. Growth in private consumption rose only slightly before decreasing and reaching the worst growth it has seen since the last consumption tax increase in 2014.

(Suga already has suggested Japan needs to continue to increase the consumption tax, but that the next hike won’t happen for quite some time.)

When the pandemic hit Japan just a few months later, domestic consumption had not yet fully recovered. And now it wasn’t just Japanese consumption that was in trouble; so were global demand and Japanese exports, as world trade slowed down.

Much like in the U.S., Japan’s government has since boosted spending and even given out cash to citizens as a way to fight the spread of the virus and offset some of the negative economic effects.

Managing the economic recovery won’t be easy for Suga, who is expected to continue Abe’s economic policies, known as “Abenomics.”

Structural reforms include the U.S.-Japan trade negotiations, which are supposed to continue after a mini-trade deal was signed between Washington and Tokyo about this time last year.

However, Japanese officials are likely to wait for the outcome of the U.S. presidential election in November before committing to any further negotiations.

Suga’s focus on Japan’s economic recovery differs slightly from that of Abe’s administration, which, before the pandemic, also prioritized modernizing Japan’s self-defense capabilities.

As Bruce Klingner, a senior research fellow at The Heritage Foundation, points out, Japan’s new prime minister will need a strong resolve to carry on Abe’s military modernization, and invest in the U.S.-Japan alliance and peace in the region.

It’s worth noting that the global recession did not stop Chinese government vessels from intruding into Japanese waters for 83 of the first 89 days of 2020.

That’s not to say Suga’s administration will ignore the security threats in the region. Earlier this year, the Japanese parliament passed a budget to support more resilient supply chains, focusing on moving Japanese investment out of China.

Suga’s administration is likely to continue the program.

He is also expected to focus on three particular economic issues: tourism, the Olympics, and cellphone services.

Since March, tourism has collapsed almost entirely. Some of that’s from Japan’s own travel restrictions. While Japan could expect to receive as many as 2.5 million tourists a month last year, visits are now down to just a few thousand per month.

Of course, getting tourism levels back to normal might depend more on a COVID-19 vaccine than anything Suga can do. That has implications for the Tokyo Summer Olympics as well.

The 2020 Olympics were delayed until 2021 because of the pandemic. And there are still concerns about whether Japan should hold the games or not.

But canceling might be a difficult decision, given that Japan is estimated to have spent more than $26 billion in anticipation of hosting the games.

Finally, Suga might lean more into his pet project of lowering cellphone fees, possibly by as much as 40%. While it might be helpful for consumers, telecommunication providers worry it could cut into their ability to invest in 5G modernization.

It can’t be easy to take over leadership of a country in the middle of such a crisis. Suga is going to have his hands full for the foreseeable future.