Protectionism and the Pandemic Are Curtailing Global Trade. Policymakers Must Act Accordingly. 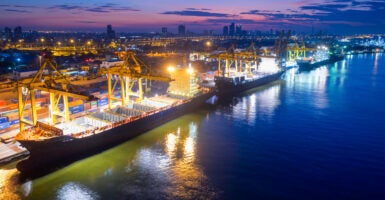 The COVID-19 recession and protectionist policies around the world have led to an 18% decline in trade, according to the World Trade Organization. Pictured: An international port in Thailand. (Photo: Kittikorn Nimitpara/Getty Images)

According to the latest semiannual trade monitoring report by the World Trade Organization, recent data indicates an 18% decline in trade over the past year.

The recessionary impact of COVID-19 is largely responsible for the decline, although world trade had already stagnated in 2019 due to slowing world growth and new protectionist measures around the globe.

Country policy responses have been mixed. Some have taken measures to facilitate trade, particularly in medical supplies. Others have imposed new restrictive measures, particularly on exports. Some countries have done both.

The WTO report notes that between mid-October 2019 and mid-May 2020, WTO members implemented 256 trade measures explicitly linked to the COVID-19 pandemic, 57% of which facilitated trade in some way.

Other notable findings from the report include:

The decline in world trade is bad news for a global economy predicted to decline by 2.5% to 8.8% this year.

Over the past decades, international trade has fueled competition, innovation, and economies of scale, empowering producers and consumers all over the world with more choices.

In that interlinked process, the freedom to trade has served as one of the pillars of economic progress, and the expansion of global markets has proven to be a powerful engine for growth and a key factor in the worldwide fight against poverty.

It is well established that the freedom to trade goes hand-in-hand with overall prosperity and human development, as documented by The Heritage Foundation’s annual Index of Economic Freedom and other studies.

Governments that curtail trade freedom in order to insulate companies from international competition run the risk of lowering productivity and ultimately reducing both producers and citizens as a whole to second-class economic status.

In a highly complex global economic environment, open trade, whether bilaterally, regionally, or multilaterally, has proven one of the best ways to promote sustained progress.

Thus, as policymakers around the world hope to ensure private sector growth for the post-pandemic global economic rebound, defending and advancing trade freedom is more vital than ever.