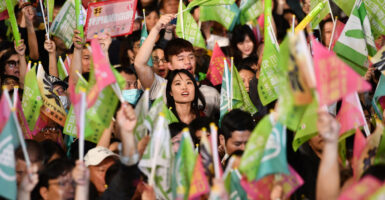 Taiwan is now a “free” economy, achieving a rating of over 80 points for the first time in the Index of Economic Freedom. Pictured: Supporters of Taiwanese President Tsai Ing-wen rally Jan. 10, 2020, in Taipei on the eve of her reelection victory. (Photo: Carl Court/Getty Images)

The 2022 Index of Economic Freedom—a cross-country study by The Heritage Foundation measuring the economic governance and entrepreneurial environments of 177 countries—went public Monday.

The key message? Economic freedom matters more than ever.

Heritage’s annual index has tracked economic freedom around the world since 1995. Nations committed to limited government and free enterprise score the highest on a scale of 0 to 100 in the evaluation of four critical policy pillars, including the rule of law and regulatory efficiency.

Especially now, these commitments are necessary for economic growth and human flourishing.

As the Index of Economic Freedom has cataloged for more than a quarter century, countries that achieve higher levels of economic freedom consistently outperform others in long-term economic agility and prosperity. Countries with lower economic freedom, on the other hand, are the ones that fall into economic stagnation, high unemployment, and deteriorating social conditions.

Here are five notable takeaways from the 2022 Index of Economic Freedom.

1. On average, countries remain “moderately free,” but just barely. The global average score for economic freedom is now 60—a loss of 1.6 points from the previous year’s 61.6. A loss of one more tenth of a point would drop the average score into the “mostly unfree” category.

3. A shake-up has occurred in the index’s top 10 rankings. Although Singapore maintained its status as the world’s freest economy, Australia, Canada, and the United Kingdom fell out of the top 10. Several small European nations performed well, with Switzerland edging up to be the world’s second-freest economy and Estonia continuing to lead the Baltic region as the seventh-freest economy.

4. Taiwan has become a “free” economy, achieving a rating of over 80 points for the first time. As the world’s sixth-freest economy, Taiwan’s openness, resilience, and competitiveness are impressive.

5. Quite regrettably, the United States has plunged deeper into the “mostly free” category with a drop to 25th place, its lowest ranking in the index’s 28-year history. The major causative factor eroding America’s economic freedom is excessive government spending, which has resulted in mounting deficit and debt burdens.

Government spending around the world in response to the COVID-19 pandemic has hurt the fiscal health of nations. From the point of view of economic policy, the imperative now is for governments to steer clear of compounding the problem with misguided policy actions that distort markets, destroy incentives to work and innovate, or otherwise diminish prospects for rapid recovery and growth.

In the long run, the proven way to revitalize economic livelihoods most meaningfully across the board is by restoring what we know has worked everywhere it has been tried for centuries: Leave individuals’ economic freedom in their own hands.

By contrast, socialism has failed everywhere it has been tried because it centers on government control and management over individuals, as if the government knows what is best for them. Socialism is a failed system that denies economic freedom to people and thus opportunities to pursue and fulfill their dreams.

As the 2022 Index of Economic Freedom documents, the global economy can emerge more resilient from this pandemic by choosing the path that runs through renewed  commitment to economic freedom. This requires the rule of law, limited government, and policies that support regulatory efficiency and market openness.

Lasting solutions to our current economic problems don’t lie in more government regulations and control. They lie in a return to free-market principles that unambiguously have made our societies stronger, more vibrant, and ever more flourishing.