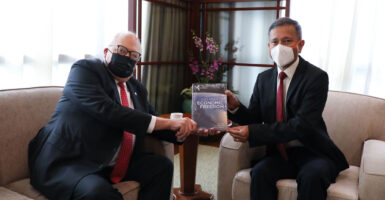 Heritage Foundation founder and former President Edwin J. Feulner presents a copy of Heritage's 2022 Index of Economic Freedom to Singapore's foreign minister, Vivian Balakrishnan, in Singapore on Monday. Singapore earned the distinction of being ranked by the index as having the world's freest economy. (Photo: Singaporean Ministry of Foreign Affairs)

Singapore keeps punching above its weight, demonstrating to the world the concrete benefit of preserving transparency, openness, and efficiency, which are the hallmarks of economic freedom.

For the third year in a row since 2020, when Singapore eclipsed Hong Kong, the small but vibrant Asian country has been top-rated in The Heritage Foundation’s annual Index of Economic Freedom, a global study that tracks economic governance and competitiveness based on the key pillars of the rule of law, limited government, regulatory efficiency, and market openness.

According to the just released 2022 index, Singapore’s economic freedom score is 84.4 out of 100, making its economy the freest in the world. As the scorecard notes, Singapore’s highly developed free market economy owes its success in large measure to its remarkably open and corruption-free business environment, prudent monetary and fiscal policies, and transparent legal framework.

Also notable is that the freedom to trade without imposing tariffs and to invest is very robust, with well-secured property rights facilitating entrepreneurship and innovation effectively. The overall rule of law is undergirded by a high degree of transparency and government accountability.

Singapore’s adherence to high levels of economic freedom has produced one of the world’s highest living standards—a feat few other nations in the developing world have been able to replicate. It’s worth noting that Singapore charted its free market path to prosperity at a time when many of the world’s most prominent intellectuals and political leaders were touting many other models.

Singapore has become a byword for excellence, whether it be in education, in commerce, in high technology, in your city administration and plans for traffic management, which others are now copying. …

Singapore is more important than ever now in the face of protectionism and the tendency to establish blocs of countries, which are more concerned with their internal trading arrangements than with keeping markets open to the whole world.

Those words ring more true now than they did back then.

From a broader foreign policy perspective, as America’s proven longtime partner in Southeast Asia and beyond, Singapore has consistently punched above its weight in regional and global affairs related to trade and security initiatives. Though only about three times the size of Washington, D.C., the city-state with fewer than 6 million people has been exerting economic and diplomatic sway on par with much larger countries.

Indeed, Singapore and the United States have a broad and deep partnership that has spanned decades. Although the two nations are not formal treaty allies, the bilateral security relationship between the United States and Singapore has been formalized and guided by a Strategic Framework Agreement, buttressed and further institutionalized by extensive trade and investment ties.

America’s latest Indo-Pacific Strategy defines its strategic ends to be to “advance a free and open Indo-Pacific that is more connected, prosperous, secure, and resilient.” To that end, the United States and Singapore have been already programmatically working together in a long-term partnership reinforced by shared values and a common desire for peace and security.

Indeed, as the global economy faces new challenges from expanding Chinese influence, a free and open Singapore matters more than ever to the United States and to the world.