How Taiwan Can Be Trusted Partner of 3 Seas Initiative 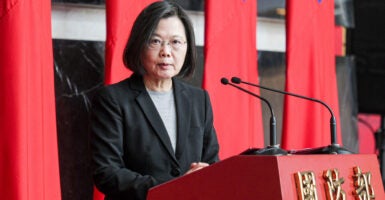 Taiwan has announced its financial pledges to Lithuania with a $1 billion credit fund to further bolster its relationship with the Baltic nation, a key U.S. ally in Europe that stands firm with Taipei.

Indeed, Taiwan is a capable and willing partner that deserves a closer relationship with Lithuania and other countries in Central and Eastern Europe. To that end, the Three Seas Initiative would be a practical venue for greater economic cooperation and engagement.

The Three Seas Initiative—launched in 2016 to facilitate greater development and trusted connectivity among 12 European Union countries around and between the Baltic, Black, and Adriatic seas—is the most significant and pragmatic economic policy initiative. The 12 countries of the Three Seas Initiative are Austria, Bulgaria, Croatia, the Czech Republic, Estonia, Hungary, Latvia, Lithuania, Poland, Romania, Slovakia, and Slovenia.

The objectives of the Three Seas Initiative are very much in line with a number of broad U.S. security and strategic economic goals toward the region as well, and they have received a growing amount of congressional interest and support.

The initiative is designed to promote connectivity among nations in that critical region by supporting infrastructure, energy, and digital interconnectivity projects, with the ultimate goal of strengthening their security and economic integration with the rest of the European Union.

The Three Seas Initiative countries are like-minded and willing partners of critical importance to the United States, both politically and economically.

From a broader strategic foreign policy perspective, Taiwan would be an added, unique partner to the U.S. and the Three Seas Initiative countries in terms of pursuing and further operationalizing the initiative.

Taiwan’s free market economic development has been unambiguously remarkable. Steady economic growth—enhanced by the pursuit of sound economic policies—has made the country one of the most prosperous in Asia. According to The Heritage Foundation’s 2021 Index of Economic Freedom, Taiwan is the sixth-freest economy in the world. (The Daily Signal is the news outlet of The Heritage Foundation.)

It’s notable that Taiwan has already sought more practical commercial relationships with the members of the Three Seas Initiative. Taipei sent a delegation of officials and business leaders to the Czech Republic, Lithuania, and Slovakia to explore greater investment cooperation, and those countries have welcomed them and sent their own delegations to Taiwan as well.

Taiwan and Poland have been proactive in promoting trade and investment partnerships. Reflecting growing bilateral economic ties, Poland launched its Investment and Trade Agency in Taipei during the eighth Polish-Taiwanese Economic Forum in 2018 to facilitate greater business interaction between Polish and Taiwanese companies, with particular focuses on biotechnology, information and communications technology, and clean energy, among other things.

Given the fact that Taiwan is a dynamic free market democracy whose resilient economy offers unique opportunities for greater trade and investment relationships, it isn’t surprising to see that these Three Seas Initiative countries have been willing to interact with Taipei in constructive and forward-looking ways.

That’s a welcome development and merits greater cultivation in the context of broader strategic partnerships the U.S. should pay attention to and encourage.

More than ever, Washington needs to pursue and capitalize on every opportunity to promote free market principles with like-minded and willing partners. The U.S. cannot reasonably go it alone if it wants to significantly address other countries’ non-market activities.

Taiwan and the U.S. have enjoyed a long history of practical cooperation based on the mutual commitment to shared values, and there’s much room to grow the practical partnership. Such a unique, practical partnership would reinforce other vital links between the two allies, particularly given the fact that Taiwan has proven to be a reliable and strong ally for America in advancing freedom, opportunity, and prosperity in the region and around the globe.

That can and should be expanded and amplified through the Three Seas Initiative. So, 2022 is the year for Washington and its trans-Atlantic partners like Lithuania and others in Europe to stand steadfast and to gear up for a new era of cooperation with Taiwan.

Inviting Taiwan to the seventh Three Seas Summit and Business Forum to be hosted by Latvia in June would be a powerful step toward that.