Government Interference in Economy Isn’t Way to Compete With China 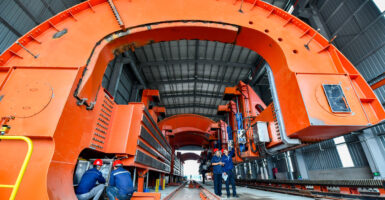 Engineers check equipment at the construction site of a "road-to-rail" project in Qian'an in China's Hebei province Sept. 16. In order to reduce pollution and traffic congestion caused by road transportation of bulk goods, special railway lines for key iron and steel enterprises have been built under a "road-to-rail" scheme, under which supply of raw materials is ensured, logistics costs are reduced, and market competitiveness is increased. (Photo: Mu Yu/Xinhua/Getty Images)

The House of Representatives is scheduled this week to consider a wide-ranging bill ostensibly aimed at improving U.S. competitiveness.

The long-awaited companion legislation to the Senate’s expansive U.S. Innovation and Competition Act—formerly known as the Endless Frontier Act—however, does just the opposite.

Regrettably, the $318 billion bill, dubbed the America COMPETES Act, doesn’t have much to do with actual China policy, either. Despite a handful of useful foreign policy and security provisions, it’s overwhelming impact will be to undermine—rather than enhance—America’s prospects of competing with China.

For example, the legislation stipulates changes in law and the establishment of new government functions with no relevance to effectively dealing with the China threat—including a range of bloated energy, environmental, and education programs; collective-bargaining mandates; relaxation of Trade Adjustment Assistance requirements; and an entire provision called “Buy American Seafood.”

To be clear, the U.S. is in a long-term struggle with the Chinese Communist Party. It’s the most critical and consequential international challenge the U.S. faces.

This competition, which America must win, spans the full range of national power—economic, military, diplomatic, and informational. We need effective, muscular policies in all those areas.

On economics, in particular, this means an approach based on free market principles.

For more than a quarter-century, The Heritage Foundation’s annual Index of Economic Freedom has measured the impact of economic liberty and free enterprise in countries around the globe. The strongly positive correlation between a nation’s level of economic freedom and its citizens’ overall standard of living and competitiveness underscores just how critical economic freedom is in practice.

At heart, economic freedom is about more than a business environment in which entrepreneurship and prosperity can flourish. With its far-reaching impacts on various aspects of human development, economic freedom empowers ordinary people and unleashes powerful forces of choice and opportunity for individuals, families, and communities by nourishing other liberties, and improves the overall quality of life.

No other system—and many have been tried—comes close to the record of free market capitalism in promoting growth and improving the human condition.

Yet, after reaching a high score in 2006, the United States fell from the “Free” category to “Mostly Free” in 2010. Economic freedom has continued to slide, hitting an all-time low in 2021, putting America behind 19 other nations.

America’s economic freedom is under assault from massive government spending bills that drive the country and its citizens deeper into debt. The taxes that must ultimately pay for the government’s spending spree shift the freedom to choose from the individual to the government.

Contrary to what some politicians argue, America’s competitive position is not threatened because the federal government is not spending or doing enough. Instead, the problem is that government has grown too big in terms of its scale, scope, and power over people’s daily lives.

America needs limited government, not expanded and expensive government, to ensure a transparent and competitive economic environment in which citizens enjoy the freedom and opportunity to prosper to the fullest extent.

The U.S. can beat China, but to do that, Washington’s policymakers must move beyond their old-fashioned tax-and-spend political instincts—and beyond this bill.