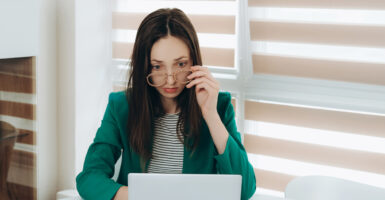 The Biden administration barrels full steam ahead to implement a socialist policy agenda that has added trillions to the national debt, hiked taxes through higher inflation, increased the regulatory burden, and centralized more federal power over the economy. (Photo illustration: Olena Ruban/Getty Images)

That was one of the core findings of The Heritage Foundation’s 2022 Index of Economic Freedom, published in February. The annual global benchmark report, which compares countries’ economic governance and competitiveness, underscored the urgent need for America to change policy course.

The latest index reported that the U.S. fell from 20th to 25th place in the rankings of global economic freedom—its lowest showing since publication of the first index in 1995.

Since release of the 2022 index six months ago, deplorably, America’s economic freedom has been further undercut by the big-government drive engineered by the Biden administration and its far-left allies.

The erosion of economic freedom is being felt by many Americans. Inflation notched a 40-year high of 9.1% in June, and the economy shrank in the first and second quarters of the year.

Despite America’s already weakened fiscal health, the Biden administration has barreled full steam ahead to implement a socialist policy agenda that has added trillions to the national debt, hiked taxes through higher inflation, increased the regulatory burden, and centralized more federal power over the economy.

Take the latest example: President Joe Biden’s cancellation of some student loan debt. Pointing out that this move would cost half a trillion dollars, the Committee for a Responsible Federal Budget underlined that the federal government’s actions on student loans since the start of the COVID-19 pandemic have cost about $800 billion. Of that, roughly $750 billion is due directly to executive action and regulatory changes by the Biden administration.

Already saddled with a national debt of over $30 trillion, America can’t afford to gift hundreds of billions more to people who are comfortably off. It only would add to inflation.

As a recent Wall Street Journal editorial sums up, Biden’s politically driven decision to cancel a half a trillion dollars in student loan debt  “is easily the worst domestic decision of Biden’s presidency and makes chumps of Congress and every American who repaid loans or didn’t go to college.”

Indeed, America’s economic freedom is under assault from massive government spending bills that drive the country and its citizens deeper into debt, and the taxes that ultimately must pay for the government’s spending spree shift the freedom to choose from the individual to the government.

From a broader perspective, the cost, size, and intrusiveness of government are a central issue of economic freedom.

Widening deficits and a growing debt burden, both of which are direct consequences of poor government budget management, have led to the erosion of America’s overall fiscal health, which the ongoing spending spree has been exacerbating. Deviations from sound fiscal positions often disturb macroeconomic stability, induce economic uncertainty, and thus undermine America’s economic freedom and resilience.

The nation’s competitive position isn’t threatened because the federal government fails to spend enough. The problem is that government has grown too big in scale, scope, and power over our daily lives.

As the Index of Economic Freedom and many other studies have pointed out, a nation’s level of economic freedom goes hand in hand with its competitiveness and the overall standard of living of its citizens.

More than ever, economic freedom—which is secured by adherence to the principles of rule of law, limited government, regulatory efficiency, and open markets—is critical to generating opportunities for people to work, produce, save, and prosper while enhancing the nation’s overall capacity for greater health, a cleaner environment, and national security.

To that end, Americans should understand that economic freedom is about much more than a business environment in which entrepreneurship and prosperity can flourish.

With its far-reaching effects on various aspects of human development, economic freedom empowers ordinary people, unleashes powerful forces of choice and opportunity, nourishes other liberties, and improves the overall quality of life.

Making a strong case for why America needs policies that nurture prosperity, Heritage Foundation President Kevin Roberts and Sen. Mike Lee, R-Utah, penned a joint op-ed earlier this year in which they wrote:

The political current is always running toward statism. But as G.K. Chesterton said, ‘a dead thing can go with the stream, but only a living thing can go against it.’ Ever since America’s founding—upon principles of market capitalism that elites hated then as now—we have been the living thing in the global economy. For two centuries, we defied the cronyism and timidity of corporate and political insiders and entrusted our economy to our people—and that has made all the difference.

As Roberts and Lee underscored in that commentary, “economic freedom is not something Americans should apologize for, but harness, spur and give free rein—for our own sake, and everyone else’s, too.”

This is the year to act on that reminder to restore America’s economic freedom.