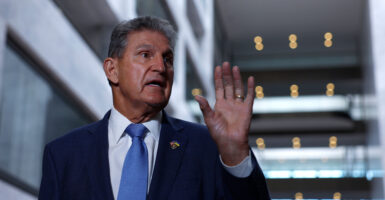 Sen. Joe Manchin, D-W.Va., speaks to reporters Aug. 1 about the deal he reached with Senate Majority Leader Chuck Schumer, D-N.Y., on the Inflation Reduction Act of 2022. The bill passed the Senate on Sunday, despite unanimous opposition from Senate Republicans. (Photo: Anna Moneymaker/Getty Images)

On Sunday, all 50 Senate Democrats voted in lockstep to push through the so-called Inflation Reduction Act, the Biden administration’s big government tax-and-spending bill that will unambiguously undermine America’s economic freedom.

The deal between Senate Majority Leader Chuck Schumer, D-N.Y., and Sen. Joe Manchin, D-W.Va., resuscitated key elements of President Joe Biden’s euphemistically named Build Back Better plan. The final vote on what should be called the Build Back Broke bill was 51-50, with Vice President Kamala Harris casting the tie-breaking vote.

If it were accurately titled, it would be the Economic Freedom Reduction Act.

Amid a cost-of-living crisis that is getting worse, with soaring year-over-year inflation of more than 9%, the Inflation Reduction Act would do great harm to our economy by imposing tax increases, manipulative federal subsidies, and price controls on every American family.

The Senate-passed bill would deepen the growing recession, continue to depress household incomes, and continue to increase overall price levels.

In other words, America’s already deteriorating level of economic freedom and vitality will be further debilitated by bad policy choices that have been knowingly made.

As succinctly noted by my colleagues at The Heritage Foundation:

The Biden administration and its liberal allies in Congress have gone out of their way to impose new burdens and to bloat the government.

The result has been the ensuing inflationary crisis and now a recession.

Instead of heeding the economic warning lights, they have offered this bill, which is identical in purpose and philosophy to what created the current economic mess.

If enacted into law, this bill would exacerbate the economic crisis and lead to a longer and much more painful stagflation.

For more than a quarter-century, The Heritage Foundation’s annual Index of Economic Freedom has measured the impact of free enterprise buttressed by the rule of law, limited government, regulatory efficiency, and market openness in countries around the globe. The strongly positive correlation between a nation’s level of economic freedom and its citizens’ overall standard of living and competitiveness underscores just how critical economic freedom is in practice.

Yet, after reaching a high score in 2006, the United States fell from the “Free” category to “Mostly Free” in 2010. Economic freedom has continued to slide, hitting an all-time low this year, ranking America behind 24 other nations.

America’s economic freedom is under assault from massive government spending bills that drive the country and its citizens deeper into ever-growing debt. The taxes that must ultimately pay for the government’s spending spree shift the freedom to choose from the individual to the government.

The latest example of that is the Inflation Reduction Act. According to Heritage research, the politically driven tax-and-spend bill would hike taxes on Americans making less than $400,000 a year, with the act disproportionately raising taxes coming from people making less than $75,000 a year by $136 billion.

Economic freedom is also eroded through numerous layers of politically motivated regulations. Contrary to what some politicians argue, America’s competitive position is not threatened because the federal government is not spending or regulating enough. Instead, the problem is that government has grown too big in terms of its scale, scope, and power over people’s daily lives.

America needs limited government, not expanded and expensive government, to ensure a transparent and competitive economic environment in which citizens enjoy the freedom and opportunity to prosper to the fullest possible extent.

As Heritage Foundation President Kevin Roberts pointed out, “Support for the Inflation Reduction Act from [Sen. Kyrsten Sinema, D-Ariz.], Manchin, and Schumer is further evidence that the left has lost sight of the broader goal of public policy: improving the lives of real Americans.”

This should be the year to correct that regrettable, often-trod path of Washington’s policymaking, and now is the time to do that to restore America’s economic freedom.