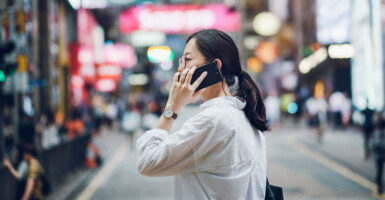 Women’s empowerment has progressed significantly in a number of countries. Yet many other nations still have much room for improvement. (Photo: d3sign/Moment/Getty Images)

The Economist summed up the importance of women’s empowerment last September by pointing out, in an article headlined “Societies that treat women badly are poorer and less stable,” that “[o]ppressing women not only hurts women; it also hurts men.”

It’s notable that women’s empowerment has progressed significantly in a number of countries. Yet many other nations still have much room for improvement to establish societies that uphold women’s dignity, as well as their political and economic participation.

So, what would be the real, practical solution to ensure greater women’s empowerment around the globe?

There’s considerable evidence that the best environment to promote that is a free market economy that emphasizes a strong rule of law, regulatory efficiency, and open market policies.

According to the 2022 report, “nearly 2.4 billion women globally don’t have [the] same economic rights as men.”

For example, Ireland—the third-most economically free country in the world, according to the recently released 2022 index—scored a perfect 100 on the World Bank’s “Women, Business and the Law” index, supporting the notion that free market economies empower and enable women to make their own life choices.

Similarly, the seventh-most economically free economy in the world, Estonia, received a 97.5 out of 100 on the World Bank’s index.

By contrast, economically “mostly unfree” countries, such as China and Russia, in the Heritage’s index scored below the global average of 76.5 on the 2022 “Women, Business and the Law” index.

Because those economically unfree countries do not have a reliable and effective rule of law, regulatory efficiency, or open markets, and usually have governments that intrude into people’s lives, women there can be subject to oppression and even abuse.

While the “Women, Business and the Law” index does not directly answer the question of how to create an equal society, the report points out—in accord with The Heritage Foundation’s annual Index of Economic Freedom—the importance of strong property rights and judicial integrity, and effectiveness in creating an equal and prosperous society for women and men alike.

In countries that have a well-respected rule of law, women tend “to leverage assets for economic gain, increasing their financial security and providing them with the collateral needed to start a business.”

The good-practice laws are strongly associated with women’s increased economic empowerment, with a more equal legal environment linked to a higher share of female entrepreneurs, according to the “Women, Business and the Law 2022” report.

Regrettably, in countries where the rule of law is ignored and not respected, women are usually the first to be given the short end of the stick. They are discouraged from contributing to the market because there are no laws that protect and advance their entrepreneurial liberty and ability.

While a strong rule of law proves essential to women’s equality, so do regulatory efficiency, including business, labor, and monetary freedom; and open market policies, such as trade, investment, and financial freedom.

The Heritage Foundation’s annual index shows how regulatory efficiency encourages entrepreneurship, and when women are allowed the ability to creatively and freely enter the marketplace as both buyers and sellers, economic growth results.

Indeed, economic freedom is the proven foundation for empowering women with more and better opportunities. Ensuring that foundation allows women to uphold their dignity, own their labor, and exercise their entrepreneurial spirits to the greatest possible degree.

The best and most pragmatic way to empower women is to recommit ourselves to policies that enhance economic freedom for women and, indeed, all of us.