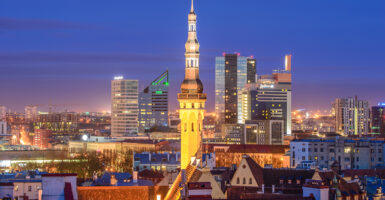 Former Soviet republic Estonia is now one of the freest economies in the world. It also has some advice for dealing with Russia’s aggression. Pictured: Tallinn, Estonia. (Photo: Getty Images)

The small Baltic nation of Estonia—a once-communist republic—now stands as one of the freest economies in the world, a shining example and defender of freedom, and a tremendous ally of the West. As a former republic of the old Soviet Union, it has some advice for dealing with Russian President Vladimir Putin’s recent aggressions.

Estonia’s prime minister, Kaja Kallas, offered her timely and keen observations on Russia in a recent interview with the Financial Times, pointing out:

There seems to be a certain type of naivety towards Russia. I was trying to explain this to [French] President [Emmanuel] Macron as well: You’re seeing this through the prism of a democratic country. You say that it’s going to be super-expensive for Russia to have a war … [Putin] doesn’t care. He’s not up for elections.

Kallas was right. Once again, Putin has proven to be an autocratic aggressor. For the second time in eight years, Putin has deployed military force to alter the borders of Europe. Putin’s decision to launch an all-out incursion of Ukraine is pure barbarism, not just to the people of Ukraine, but to the entire world.

Estonia once lived through the turbulent, unwelcome history of being annexed by the Soviet Union. That has given the small Baltic nation an acute perspective on Putin’s Russia, reinforced by a sturdy determination never to return to those days.

As a matter of fact, Estonia has consistently warned the West about the dangers of Putin, especially after his first aggression in Georgia in 2008 and even more so after the 2014 forced annexation of Crimea from Ukraine.

It must have been sadly ironic for Estonia to witness the horrifying beginning of “Putin’s new world disorder” triggered by the invasion of Ukraine on Feb. 24—the same date that marked the Baltic nation’s Independence Day.

As a leader in economic freedom equipped with a highly innovative and competitive economy, Estonia has been on the front lines of guarding free market democratic values against Russia’s malicious acts. Those acts have included cyberattacks, ubiquitous espionage operations, and repeated airspace violations.

Indeed, Estonia stands out as a shining example of defending and advocating freedom.

Since the fall of the Soviet Union, this tiny northern Baltic country that shares a border with Russia has made huge progress in implementing democracy and economic freedoms and in developing a strong national defense.

Estonia has aligned itself with the West—particularly the United States—and has dramatically demonstrated how the power of liberty and democratic values can bring peace, prosperity, and human flourishing to a once-socialist nation.

Estonians have fought often for freedom throughout their history. Since regaining their sovereignty in 1992 and winning the battle against communism and rejecting socialism, they have taken swift and decisive policy reforms that have enhanced their economic freedom.

Many countries delayed such necessary policy decisions and reforms after the dissolution of the Soviet Union, which led to problems that might have been avoided if those changes had been implemented early on. But Estonia got this right, stayed true to its commitment to freedom, and has the results to show for it.

The small Baltic nation is one of the freest and most resilient economies in the world, with a transparent government and free markets that function under the rule of law. According to The Heritage Foundation’s recently released 2022 Index of Economic Freedom, Estonia’s economic freedom score is 80, making its economy the seventh freest this year, with an overall score well above the regional and world averages.

Recording notable advancements of economic freedom over the years, in 2022, for the first time in its index history, Estonia joins the top tier of nations with the highest economic freedom rankings in the world.

Estonia firmly represents something much bigger geopolitically as a staunch defender of economic freedom and democracy alongside the United States. It has been also working closely with the United States on the Three Seas Initiative, which facilitates interconnectivity in Central and Eastern Europe through digitalization, energy, and infrastructure projects.

In her interview with the Financial Times, Kallas noted, “Our development has been quite rapid, but for me it’s very important to understand that it’s not for granted.” She further underscored, “We could lose it all again.”

Her words ring very true. And especially with what is happening with Putin and Ukraine, now is the time for the U.S. and Estonia to work more closely together than ever.