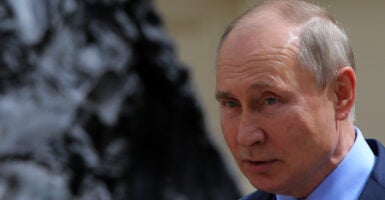 We know that Russian progress with market-oriented reforms has been uneven and often reversed at the urging of those with an interest in maintaining the status quo.

Large stated-owned institutions have increased their domination of the financial sector at the expense of private domestic and foreign banks.

Corruption pervades the economy and continues to erode trust in the government.

Indeed, Russia’s economy continues to underperform, making avoidable economic declines inevitable. Three decades after the collapse of communism and the disintegration of the USSR, the Russian government has still not adopted any of the meaningful structural economic reforms the country needs to make its economy truly competitive for its people.

According to the 2021 edition of The Heritage Foundation’s Index of Economic Freedom, Russia’s economic freedom score is only 61.5 out of 100, making its economy the 92nd-freest among the 178 countries whose economies were scored. Russia is ranked 42nd among 45 countries in the European region, with its overall score below both the regional and world averages.

The cold reality is that, based on the current trajectory, the long-run prospects for the Russian economy are bleak.

Russia is a corrupt petrostate (a nation whose economy is heavily dependent on the extraction and export of oil or natural gas) with a rapidly aging population. Its economy is deteriorating.

Until the evenhandedness of the rule of law is strengthened considerably, the investment code is liberalized, and the government pursuit of corrupting and distortive statist economic policies ceases, however, further expansion of economic freedom in Russia will be difficult, to say the least.

Worse, Russia has unambiguously abused individuals’ economic and property rights, thereby further undermining the attractiveness of the country at home and abroad for investment and economic diversification.

These ongoing issues are likely to have serious and long-lasting economic, political, and social consequences. Absent reforms to spur stronger and more widespread economic growth, it isn’t hard to gauge that Russians are likely to continue losing hope and faith in the future of their country.

It’s always possible that Russian President Vladimir Putin might respond to an economic crisis by becoming more aggressive. He will likely continue his economic and foreign policy pivot to China, as well.

Unlike during the Cold War, Russia is not the U.S.’ primary rival, even though Russia has defined itself as a geopolitical adversary to the U.S.

But precisely because Russia’s authoritarian, ill-advised strategy relies on returning to the Soviet approach of holding onto a statist command-and-control economic model and playing the spoiler, Russia is irresponsibly involved in many of the world’s problems, hot spots, and crises.

The best preventative for Russia’s economic problems at home and its adventurism abroad is a good dose of economic freedom.

As Middendorf pointed out:

The benefits of economic freedom are well-documented. People in [an] economically free society have better jobs and are less likely to live in poverty.

They enjoy greater political freedom and can better defend their human rights.

The most critical lesson for today’s tumultuous times is the proven superiority of the free-market system and the value of economic liberty.