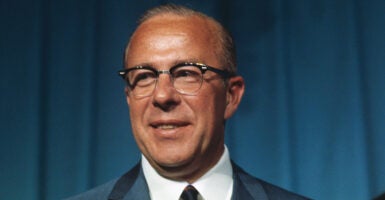 George P. Shultz, one of America’s leading statesmen, died Feb. 7 at the age of 100. He is pictured here in 1968 shortly after then-President-elect Richard Nixon announced Shultz as his pick for labor secretary. (Photo: Bettmann/Contributor/Getty Images)

George P. Shultz, one of America’s leading statesmen and champions of free markets, died Saturday. He was 100.

During his distinguished career, Shultz, a former Marine, served as secretary of labor, secretary of the treasury, and secretary of state. On top of that, he was the first director of the Office of Management and Budget.

[George Shultz] served his country long and well. … George understood President Reagan’s desire to rid the world of nuclear weapons, and he played a major role in standing up to the Soviet Union during the 1980s. … George’s work was a key reason the United States was able to win the Cold War. All Americans owe him a debt of thanks.

Shultz was a free market economist by training. He spent his academic life as a professor and dean at the University of Chicago, where he came to forge a lifelong friendship with Milton Friedman in the 1960s.

Throughout his government career, no matter the position, he relied pragmatically on his free market economics toolkit, and especially on his understanding that the free market system is “a system of accountability” that is “relentless in punishing bad performances and rewarding good ones.”

In his last book, “Choose Economic Freedom: Enduring Policy Lessons from the 1970s and 1980s,” co-authored with Stanford economist John Taylor, Shultz, emphasized the importance of economic freedom, noting “how market fundamentals beat politically popular government interventions—be they from Democrats or Republicans—as a recipe for success.”

In an interview in 2000, Shultz underscored the power of freedom and its interplay with other key institutional tenets. He elaborated:

[I]f you have a society that doesn’t put any value on personal freedom, it’s going to be hard for that society to have genuinely free markets. And I think as societies try to have free markets without more individual freedom, what happens over time is that the market pushes into the political system and changes it, as we have seen on a number of instances.

Shultz’s words and insights on liberty are powerfully relevant today.

In fact, to many who have long tracked economic freedom, recent years have served as a vivid reminder of the continuing struggle between the state and the free market.

In times of uncertainty, it may be natural that people will look to their governments for answers. Yet the long-term solutions to various economic problems do not lie in more government controls and regulations. They lie in a return to free market principles.

Perhaps the most critical lesson of ever-growing government intrusion into America’s free market system is that the fundamental superiority and value of economic liberty must be steadfastly reiterated, or even retaught, to many political leaders and policymakers.

It would be a tragic mistake to assume that in a time of crisis we must abandon our commitment to economic freedom in the hope of politically resetting the situation. That freedom has unambiguously made our society strong, vibrant, and flourishing.

More than ever, ideas matter and have consequences, as Shultz demonstrated in practice. As The Wall Street Journal’s editorial board put it: “George Shultz will be remembered as a leading force in shaping and executing a U.S. strategy that liberated millions from the ideology of totalitarianism.”

Rest in peace, George Shultz. America and the world are indebted to you.