Religious Liberty Is Eroding in Canada. Here’s What Americans Should Learn. 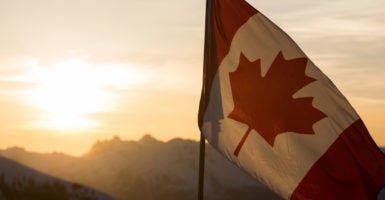 Zachary Jones is a member of the Young Leaders Program at The Heritage Foundation.

Outside of watching the occasional hockey game or purchase of maple syrup, most Americans pay little attention to Canada.

We may know of Prime Minister Justin Trudeau’s colorful socks, but little of how unpopular he is among his constituency. We may discuss the single-payer health care system, but are unfamiliar with the government’s disrespect for religious liberty of our neighbors to the north.

In light of the immense trade between our two countries, we must determine if religious intolerance is an intangible export that has escaped our notice.

Last month, Alberta’s Child and Family Services barred a Christian couple from adopting a child because their religious views about sexuality—views shared by orthodox Jews and Muslims—were incompatible with “the official position of the Alberta government.”

The Ministry of Children’s Services stated that the couple’s belief that sexuality should not be experienced or explored until a person is married, would not create a “safe, healthy, loving, and inclusive home.”

And in June, Ontario passed a law that gave state agencies the power to prevent families from adopting or fostering children if the parents would not affirm the child transitioning their “gender identity” from male to female or vice-versa, calling such a denial “child abuse.”

Similarly, the American Civil Liberties Union is suing the state of Michigan over legislation that allows faith-based adoption agencies to only place children into homes with mothers and fathers while under government contract.

And much like Ontario, Illinois is requiring foster parents to affirm the gender identity of any child in their care and aid in any medical procedures the child wishes to undergo.

The Canadian government has unilaterally taken positions on sexuality without the consent of its citizenry, much like the Obama administration’s unilateral decision to reinterpret the definition of “sex” to include sexual orientation and gender identity in Title IX.

But if Americans and Canadians can’t adopt or foster children because they don’t affirm a child undergoing potentially harmful hormone therapies and sex-reassignment surgeries or sexual activity outside of marriage, will the government also begin using this criteria for “good parenting” of biological children?

Will they treat the parenting practices of Orthodox Christians, Jews, and Muslims as suspect if they simply refuse to adopt the latest sexual trends?

Also in Canada, the Supreme Court will soon determine if attorneys who hold orthodox religious beliefs on sexuality are eligible to practice law.

Before Trinity Western University could even open its law school, the accrediting legal societies within Nova Scotia, Ontario, and British Columbia voted not to accredit graduates from the university’s school of law, because the Christian university has Orthodox Christian beliefs about marriage and sexuality.

Trinity Western University is the only Canadian university to have received an A+ grade in quality of education over the past seven years, yet in 2014, the Law Society of Upper Canada labeled the students’ views as “abhorrent” and “not welcome in the public marketplace.”

Without a degree from an accredited law school, students cannot practice law in the province.

Similarly, in 2015, the mayor of Salem, Massachusetts, lambasted Gordon College, a Christian university, for its beliefs about marriage after the university president wrote to President Barack Obama asking for a religious exemption from a forthcoming executive order on hiring practices related to sexual orientation and gender identity.

The mayor decided to prohibit Gordon College and its students from using a local meeting hall they had used for years. Lynn Public Schools then banned Gordon College students who were majoring in education from training as student teachers at local public schools.

The New England Association of Schools and Colleges even held a special meeting to consider revoking Gordon’s accreditation.

In both the United States and Canada, governments and accreditors are threatening the ability of graduates of Christian universities to work in the professions for which they have been trained.

Canadian members of parliament also denied member Rachael Harder the chance to chair the Status of Women Committee led by the Liberal Party solely because of her pro-life views. Despite the chair position being procedural, not political in nature, the Trudeau government refused to allow Harder’s “outrageous” views into any kind of position of authority.

Much like a scene from “Mean Girls,” politicians staged a walkout to protest Harder’s appointment because of her viewpoint on abortion. Ultimately, they gave the position to a member of parliament who did not want it.

In the United States, senators, including Sens. Dianne Feinstein, D-Calif.; Bernie Sanders, I-Vt.; and Al Franken, D-Minn., and leftist organizations like the American Bar Association have smeared judicial nominees like Judges Amy Barrett and Steve Grasz and public officials like Kelvin Cochran and Russell Vought as “unqualified” and “hateful,” simply because of their Christian beliefs.

Their ability to serve as judges, work in government, or lead a fire department is being questioned solely because of their religious views.

In both the United States and Canada, the ability to work in government and pursue your dreams is becoming increasingly dependent on one’s beliefs about sexuality, biology, and the beginning of human life.

These developments should concern all those who believe in the right to not only hold religious beliefs in private, but to exercise them in public.

Canada was founded on the idea of religious pluralism, allowing Catholics living in Quebec to freely practice their faith. The United States was founded as a refuge for religious dissenters, as the Puritans fled persecution from the Church of England.

It is this commitment to religious liberty for all that has led America to defend religious minorities around the world, including Jews, Muslims, Baha’is, Buddhists, and Zoroastrians.

If America and Canada, who are traditionally the foremost defenders of religious freedom around the world, are now forsaking that value, what will happen to the Rohingya Muslims in Burma, the Christians and Yazidis facing genocide by ISIS, and the Jews who are facing renewed anti-Semitism in Europe, all of whom the U.S. has fervently advocated for?

Right now, Canadians and Americans of faith have the opportunity to form strategic alliances, especially as they relate to marriage, family, and the free exercise of religion. But the growing threats to religious liberty and freedom of conscience make it especially urgent that these partnerships develop quickly.

Many of the world’s most dire and violent religious conflicts are rooted in lack of respect for religious freedom and religious diversity. There is no time to waste.