Can a Christian Serve as a Judge Anymore? 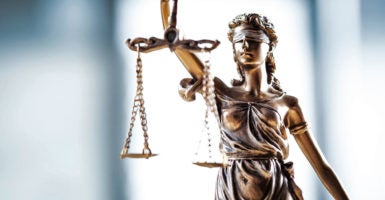 Travis Weber is the vice president of policy at the Family Research Council.

Earlier this month, during a judicial confirmation hearing for 7th U.S. Circuit Court of Appeals nominee Amy Barrett, who is a Catholic law professor, Sen. Dianne Feinstein, D-Calif., questioned whether Barrett could be a Christian and a judge at the same time:

Why is it that so many of us on this side have this very uncomfortable feeling that—you know, dogma and law are two different things. And I think whatever a religion is, it has its own dogma. The law is totally different. And I think in your case, professor, when you read your speeches, the conclusion one draws is that the dogma lives loudly within you, and that’s of concern when you come to big issues that large numbers of people have fought for years in this country.

What caused Barrett to draw such a charge?

Feinstein appeared to be questioning Barrett based on a scholarly article she wrote exploring what a Catholic judge should do when the law required something that went against their faith.

What did Barrett say in the article? Based on Feinstein’s question, one would think she brought down the theological cudgel and sided with faith over the law.

Hardly so. Barrett actually wrote that the judge should recuse him or herself in such cases, as “[j]udges cannot—nor should they try to—align our legal system with the Church’s moral teaching whenever the two diverge.”

Let us assume that Feinstein actually read the article. Instead of questioning her over such sentiments, Feinstein should be happy that Barrett would bind her public service by moral principles. Does she want judges who are not so bound?

Perhaps Feinstein should direct her own question toward herself. What is her own dogma? Her own beliefs obviously cause her “concern” that someone of serious Christian faith would hold a position of public service.

The point is that everyone has private beliefs that guide the way they live their lives. The only question is what those beliefs are.

As the writer David Foster Wallace noted during a commencement speech to Kenyon College graduates many years ago, “In the day-to-day trenches of adult life, there is actually no such thing as atheism. There is no such thing as not worshipping. Everybody worships. The only choice we get is what to worship.”

So, what does Feinstein worship? What personal beliefs guide her? It sounds like she believes in a public square scrubbed clean of Christians. If so, what gives her the right to impose that “dogma” on Barrett and others?

Feinstein should be happy that Barrett has a moral code by which she will act ethically. Why would anyone want a judge who lacks such a code?

The more people believe there is a higher power watching their actions and requiring them to do the right thing (such as telling the truth and refusing a bribe), the less likely they are to act unethically—a crucial quality for judges and other public servants.

Later in the same hearing, Sen. Dick Durbin, D-Ill.,—not to be outdone—jumped in with his own inquisition into her religious beliefs and asked Barrett: “Do you consider yourself an orthodox Catholic?”

This isn’t the first time we’ve seen this type of anti-religious grilling resurface in our modern political era.

When Russell Vought was nominated for deputy director of the Office of Management and Budget earlier this year, Sen. Bernie Sanders, I-Vt., thought it appropriate to quiz him about a blog post he wrote defending the Christian view of salvation in the context of a private theological debate.

As I wrote at the time, Sanders’ views­—refusing to approve of a nominee for nothing but his private religious beliefs—were the ones that were bigoted, not the other way around.

Durbin should realize his intolerance is showing in this case.

Regardless, this whole episode exposes a flaw in thinking about the connection between one’s core beliefs and the law. Everyone has beliefs that guide their lives. The only question is what they are.

As a society, we should want people in positions of public trust who have principles guiding them to act ethically and serve the public well. No American should ever be forced to choose between their faith and public service.

If Feinstein and Durbin realized that, they would vote to confirm Barrett immediately.