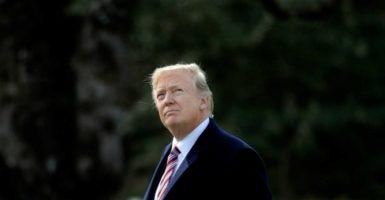 Conservative leaders are calling for President Donald Trump to move forward on an executive order to protect the exercise of religious beliefs by rolling back Obama-era regulations that targeted Catholic Charities, the Salvation Army, a military chaplain, Christian business owners, and others.

“[Americans] are about to suffer under Obama-era anti?religious regulations,” a CNP letter says.

“The above individuals and groups, and many others like them, have either been punished by the government for their religious beliefs or are about to suffer under Obama-era anti-religious regulations,” wrote more than 150 conservative movement leaders to Trump in a letter on Wednesday.

“They need protections that you can grant through an executive order to prevent federal discrimination against them for acting in accordance with their beliefs,” the letter continues. “We urge you to take action to ensure their freedom to believe and live out those beliefs is protected from government punishment.”

“I think we’ve discussed executive orders in the past, and for the most part we’re not going to get into discussing what may or may not come until we’re ready to announce it,” Spicer told The Daily Signal. “So I’m sure as we move forward we’ll have something.”

The White House did not immediately respond when asked about the letter Thursday.

The Council for National Policy, a conservative nonprofit, circulated the letter.

The letter goes on to cite numerous examples, such as federal grantees World Vision, the Salvation Army, the Adventist Development and Relief Agency, and Samaritan’s Purse facing the choice of violating their faith or giving up federal grants.

The letter similarly cited the case of the Little Sisters of the Poor charity resisting the Obamacare mandate on contraception and abortion-inducing drugs.

The letter goes on to note: “Service members like Navy Chaplain Wes Modder have been disciplined for counseling according to their Christian beliefs about natural marriage.”

The Obama administration even took actions against religious freedom through the U.S. Department of Agriculture, as the letter notes in one case, saying:

Under a policy issued by the Obama administration’s agriculture secretary, a [U.S. Department of Agriculture] official threatened to remove all USDA inspectors if West Michigan Beef Company owner Donald Vander Boon didn’t permanently refrain from placing in the company’s breakroom religious literature supporting marriage between one man and one woman that the department deemed ‘offensive.’ The Vander Boons were forced to choose between their religious beliefs and having their plant closed and their employees left jobless.