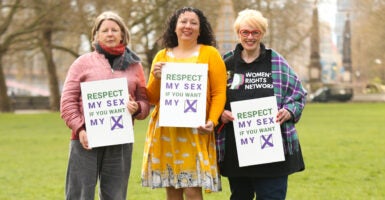 A new legal ruling in the United Kingdom should be a cause for celebration among Americans who hold traditional beliefs about gender and sexuality.

An employment panel ruled Wednesday in favor of a researcher who lost her job at the London offices of an international think tank after writing on Twitter that human beings cannot change their biological sex, finding that she was discriminated against and victimized for personal beliefs.

At one point, the tribunal’s ruling in the case of Maya Forstater noted: “We reminded ourselves that it would be an error to treat a mere statement of Ms. Forstater’s protected belief as inherently unreasonable or inappropriate.”

After the Center for Global Development, which is based in both Washington and London, declined to renew Forstater’s contract, she took her case to court.

It was simple: She wanted to establish that “gender-critical views” are a protected philosophical belief under the Equality Act, the basis of anti-discrimination law in Great Britain.

The three-member employment panel reviewed several of Forstater’s tweets, including those in which she drew an analogy between self-identifying transgender women and Rachel Dolezal, a white American who misrepresented herself as black.

In one tweet, Forstater wrote: “A man’s internal feeling that he is a woman has no basis in material reality.”

Forstater also tweeted about Credit Suisse executive Pips Bunce, who says he identifies as a woman for part of the week. She referred to Bunce as a “part-time crossdresser.”

However, two of the three members said, Forstater’s tweets

did not amount to an objectionable or inappropriate manifestation of Ms. Forstater’s belief, given the context of a debate on a matter of public interest; the fact that Pips Bunce had put themself forward in public as a person who is gender fluid and who dresses sometimes as a woman and sometimes as a man.

In other words, Forstater was stating facts, and she shouldn’t have been penalized for that.

Forstater’s win did not come easily. She originally lost her case at an employment tribunal in 2019. We reported on her story in 2020.

Forstater had reiterated in a witness statement to the tribunal that she is gender-critical, meaning she believes that “‘sex’ is a material reality which should not be conflated with ‘gender’ or ‘gender identity’” and that “being female (or male) is an immutable biological fact, not a feeling or an identity.”

In a lengthy judgment issued Dec. 18, 2019, Judge James Tayler ruled that Forstater’s view was “not worthy of respect in a democratic society,” calling it “absolutist” and “incompatible with human dignity and fundamental rights of others.”

Tayler also said Forstater’s views were not protected as a “philosophical belief” under the Equality Act of 2010, even though “religion or belief” is one of nine categories protected in the law.

In June 2021, Forstater won a landmark decision on appeal. In it, High Court Justice Akhlaq Choudhury said gender-critical views may be “profoundly offensive and even distressing to many others,” but “they are beliefs that are and must be tolerated in a pluralist society.”

The case was sent back to the original employment tribunal to determine whether Forstater had proved her claim on the facts.

“My case matters for everyone who believes in the importance of truth and free speech,” The Guardian quoted her as saying. “We are all free to believe whatever we wish. What we are not free to do is compel others to believe the same thing, to silence those who disagree with us, or to force others to deny reality.”

One of Forstater’s most vocal proponents has been “Harry Potter” author J.K. Rowling, whom she thanked for standing by her.

Rowling herself tweeted Wednesday that because of Forstater, every woman “who’s been harassed, silenced, bullied or lost employment because of her gender critical beliefs is freer and safer today.”

Rowling has backed Forstater for years now, even writing screeds to explain her own views on the importance of single-sex spaces and the need to provide females with safety and privacy.

It all started with Rowling’s support for Forstater after she lost her job at the think tank.

Rowling has been excoriated for writing commonsense tweets such as this:

As for Choudhury’s statement that Forstater’s beliefs must be tolerated in a pluralist society, truer words were never spoken.

And his words are apropos to the United States, where gender and language issues increasingly surface. The Daily Signal recently compiled a list of 13 individuals and outlets punished by Twitter for expressing traditional, orthodox views about gender and sex.

Hopefully, this British judge’s view is one that will take root here.