UK Eco-Extremists Show Why US Needs a Counter-Drone Strategy 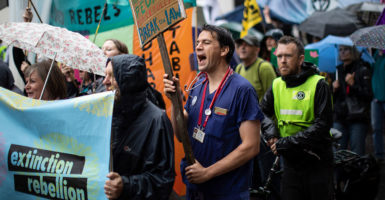 Climate change activists from a group called Extinction Rebellion are threatening to fly drones over London’s Heathrow Airport with the goal of deliberately stopping all flights for a week.

If their efforts were to succeed, the group could shut down the United Kingdom’s busiest airport and upward of a million travelers could be affected.

There are many ways to describe Extinction Rebellion’s plan: “Criminal” and “radical” are terms that come to mind. But so, too, does the word “easy.”

Consumer drones are less expensive and more capable than ever, and these eco-activists claim to need only a few to sow transportation chaos.

Like it or not, Extinction Rebellion is probably right.

Last year, 1,000 flights were disrupted during the Christmas drone incident at the U.K.’s Gatwick Airport. Put simply, small drones can cause big problems, and that won’t change until law enforcement agencies have the specialized equipment and training they need to detect, assess, and safely interdict these aerial threats.

Unfortunately, most U.S. law enforcement agencies are not just woefully unprepared. They are actually legally barred from responding to dangerous drones.

That’s not to say that drones are inherently unsafe or should be unwelcome in American skies. Innovators and entrepreneurs have found many exciting and novel uses for them, particularly as drones have become increasingly capable and affordable.

These unmanned aerial vehicles have aided in disaster-relief missions, delivered urgently needed medical supplies, helped police track suspects and find missing persons, and have opened the skies to photographers. Amazon and Google, among others, are racing to widely deploy on-demand package delivery.

But criminals have gotten in on the action, too, and have used drones to fly drugs over the border, smuggle contraband into prisons, and even to surveil law enforcement activities.

Terrorists have used them as weapons in war zones, and in Venezuela, they were used in an assassination attempt against dictator Nicolas Maduro.

And then there are the blatantly reckless operators who fly their devices in restricted airspace near airports, sometimes coming within feet of airliners as they take off or land, or over crowds at sports stadiums.

As if these threats were not enough to spur action, we can now add “drone activism” to the mix.

Unfortunately, while the U.K. is moving closer to empowering law enforcement officials to deal with reckless and malicious drones, here in the U.S., those efforts are proceeding at a pace that can appropriately be called glacial.

Last year, Congress passed the Preventing Emerging Threats Act to authorize, for the first time, counter-drone law enforcement activities by agencies within the U.S. departments of Justice and Homeland Security.

That was an important step. Before that, no law enforcement agencies at any level of government had the legal authority to engage and stop a malicious or reckless drone that threatened the public.

But, while federal agencies now have limited counter-drone authority, no state or local agencies do—meaning, the first line of defense against threatening or disruptive drone activities are effectively barred from doing anything to safeguard the public.

There are, broadly, two reasons for this untenable situation.

First, the Federal Aviation Administration has interpreted the legal term “aircraft” to include drones, largely to grant itself the authority to regulate them. As a result, federal statutes that prohibit shooting down, say, a 747 now apply to children’s toys.

Second, an array of federal laws and regulations addressing wiretapping, computer hacking, and signal jamming block the use of technologies that provide alternatives to shooting drones down.

For instance, some counter-drone solutions afford defenders the chance to disrupt drone-control signals or hack and seize control of a noncompliant drone.

So, as the FAA made clear last year, the police can’t do much more than observe and report. That is clearly not the role our communities’ police officers are meant to—or ought to—play.

In June, Congress heard firsthand how legal barriers are adversely affecting public safety. At a hearing, senators were implored to empower nonfederal agencies to “take charge of their own safety,” as the head of the Massachusetts Port Authority put it.

To that end, Congress should lay the groundwork for nationwide counter-drone operations by mandating that the Department of Homeland Security initiate a pilot program to partner with select law enforcement agencies in cities and communities throughout the nation.

A pilot program would allow officers to be deputized to act under federal direction and existing legal authorities, which would begin the process of training and gaining proficiency in approved counter-drone equipment.

Such a program would generate data that would lead to better-informed procedures and rules of engagement and would expedite the broad rollout of counter-drone equipment.

As drones evolve, the systems designed to defend against them must evolve, too. But the same laws that restrain the police also chill investment and block testing.

Congress could overcome this with legal exemptions for businesses and universities that would permit testing and encourage innovation.

It’s only a matter of time before America witnesses something akin to Extinction Rebellion’s brand of drone activism—or worse. The longer lawmakers delay action to empower law enforcement agencies, the greater the danger of being caught flat-footed when that day arrives.