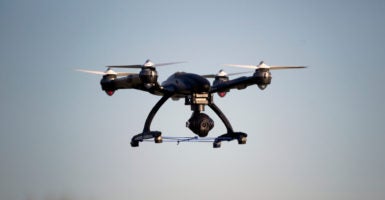 "It is crucial both to expedite the integration of drones into the airspace and defend against their misuse," write Jason Snead and Lucas Drill. (Photo: Kypros/Getty Images)

State and local law enforcement agencies urgently need the tools and legal authority to identify and stop reckless or malicious drones that endanger the public.

That was the message delivered to Congress last week during a hearing on the challenges of drone security—and it cannot come soon enough.

Unmanned aircraft systems, commonly referred to as drones, are revolutionizing everything from search and rescue to package delivery. But one man’s tool to provide disaster relief can be another’s to cause disaster.

Drones have recently caused massive disruptions at Gatwick Airport in the United Kingdom, ferried explosives in an apparent assassination attempt on Venezuelan dictator Nicolas Maduro, and have flown over crowded sports stadiums on both U.S. coasts. One even crashed onto the lawn of the White House.

Drones are exposing the vulnerabilities of even hardened facilities, flying dangerously close to passenger aircraft and risking midair collisions, and being used for criminal misconduct and drug smuggling. Authorities need to be able to detect and mitigate drone threats before they cause harm.

And yet, until recently, the departments of Defense and Energy were the only entities legally permitted to do so. Last year, Congress extended this counter-drone authority to the Justice and Homeland Security departments—a welcome move—but these agencies are not omnipresent.

Angela Stubblefield, deputy associate administrator of the Office of Security and Hazardous Materials at the Federal Aviation Administration, said at the hearing that federal counter-drone efforts are limited to “very specific mission sets, largely for the protection of national security assets.”

So in the event of a drone incident, unless federal agents are already on the scene with appropriate tools to detect and neutralize the dangerous drone, there will be no first responders with the tools, training, or legal authority to safely mitigate threatening or reckless behavior in real time.

How is that possible?

As scholars at The Heritage Foundation have pointed out previously, the list of laws and regulations that foreclose counter-drone activities is lengthy, and ranges from the federal wiretap statute to a law that makes it a felony to destroy an “aircraft,” which the FAA has interpreted to include drones.

Thus, state and local entities such as the Massachusetts Port Authority, which was represented at the hearing, are left with their hands tied during incidents such as drone incursions into restricted airspace over airports or the sighting this April of a drone over Fenway Park.

Rather than act quickly to interdict these illicit flights, authorities’ only option is to locate an operator and order him to land his craft.

That approach did not work for authorities in the U.K., who have yet to identify the people responsible for shutting down Gatwick Airport and disrupting roughly 1,000 flights last December.

There is no reason to believe it will work better in a malicious incident here. If a bad actor resolves to use a drone to commit harm, authorities may have only seconds to respond. Taking time out to attempt to track down an operator will not be an option.

This helps to explain why, in his written testimony, Massachusetts Port Authority’s chief security officer, Harold Shaw, “appeal[ed] … to Congress to take additional steps that will empower state and local partners to take charge of their own safety.”

And as Lee pointed out, involving these nonfederal departments is a matter of necessity, since federal authorities simply cannot be everywhere, all of the time.

Meanwhile, Sen. Ed Markey, D-Mass., said it might be time for Congress to revise federal statutes that bar law enforcement agencies from acting to safeguard the nation’s airports, infrastructure, and communities.

To that end, there are several policy reforms Congress could adopt immediately that would leave Americans better protected from drone threats without introducing undue risk to the nation’s skies.

First, Congress should lay the groundwork for the eventual broad deployment of counter-drone technologies by mandating that the Department of Homeland Security commence a “pilot program” to partner with law enforcement agencies from across the country.

Officers within these agencies could be deputized to act under existing federal legal authorities, allowing them to train on, and gain proficiency in, approved counter-drone equipment, procedures, and rules of engagement, all while under federal supervision.

That would avoid the creation of a counter-drone “Wild West” and generate invaluable data and experience to inform and expedite the wider deployment of these technologies.

Second, Congress should foster private-sector development and testing of counter-drone technologies by creating an exemption for firms and universities, which today are caught up in the same legal thicket as state and local agencies.

Witnesses testified to the chilling effect of this legal landscape on research and investment in new technologies—technologies that can potentially overcome the limitations of today’s counter-drone systems.

To be clear, any new technology can be used for both good and ill. That’s why it is crucial both to expedite the integration of drones into the airspace and defend against their misuse. And the federal government cannot do these tasks alone.