In Britain, Conservatives Seek a Mandate From Voters 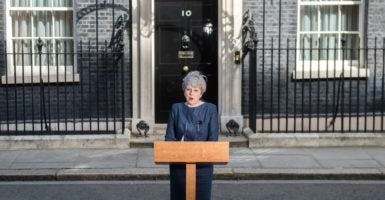 British Prime Minister Theresa May called for a general election to be held on June 8, citing the need to secure "strong leadership" going into Brexit negotiations. (Photo: i-Images/Polaris/Newscom)

On Tuesday, British Prime Minister Theresa May shocked Britain by calling for an early general election, which will be held on June 8. This election will decide the fate of her government and Brexit.

In many ways, May’s decision to “go to the country”—British slang for calling an election—is the way it should be.

In the good old days, when a prime minister resigned and was replaced by another prime minister from the same party, the new leader would call an election after a decent interval, in order to get a mandate to govern on his own authority.

That tradition, unfortunately, has decayed—and those who allowed it to decay have suffered as a result.

When Gordon Brown replaced Tony Blair as prime minister in 2007, he was widely expected to call an election in November 2007. But Brown didn’t act, and his lack of courage was widely blamed for the collapse in his own popularity, and that of Labour, over the following months.

By that measure, May’s decision to call an election wasn’t just the right thing to do—it was the safe one as well.

But it wasn’t the expected decision. For months, May had argued, true to her careful approach to the big issues, that there was no need for a general election.

When I visited London last month, the gossip was that, though a few senior Conservatives wanted an election, they weren’t going to get their way, because May believed that calling one was too risky.

Now, the balance has swung in favor of an election. And the public seems to agree—by 3-to-1, polls suggest they support May’s decision.

Why? There are several reasons.

The opposition Labour Party has continued to slide in the polls. The Scottish nationalists have already demanded a second independence referendum for Scotland, so there is now no reason to avoid an election that would give them an occasion to make this demand.

A number of Conservative members of Parliament are under investigation for how they spent money during the 2015 election. Holding elections just to replace them would be a drain on the party.

The parliamentary challenge of seeing Brexit through is real. And public support for Brexit has grown and solidified, so on the biggest issue of the day, the people are increasingly with the Conservatives.

It’s tempting to see this election as a second referendum on Brexit. There’s no doubt, as May’s statement made clear, that Brexit is central to it, and this election will certainly decide the fate of Brexit.

But this election is about a lot more than Brexit. There’s a reason why the Labour Party is doing historically badly: Its leader, Jeremy Corbyn, is a Stalinist who has sided with virtually every terrorist movement and foreign dictator you could name.

Most sensible Labour members of Parliament reject Corbyn, but in the absence of any good Labour ideas and alternative leadership, he is the public face of the party—and it’s an ugly one.

So what’s the outcome of the election likely to be?

My answer to that question is that we hold elections because we don’t know the outcome. The latest academic forecast suggests that the Conservatives will win a majority by 112 seats, up from a mere 17 today.

May will certainly have run the odds carefully, but this cannot have been a slam dunk decision, or she would have made it earlier.

So in order to win an overall majority, May needs to take seats from Labour. The omens for that look good, but the Conservatives couldn’t do it in 2015.

For a country with supposedly well-settled politics, Britain has a habit of creating surprises—from the Scottish referendum, to the Tory victory in 2015, to Brexit, and now the sudden 2017 election.

The next eight weeks are likely to be dramatic—and here as well as in Britain, conservatives have a lot at stake.