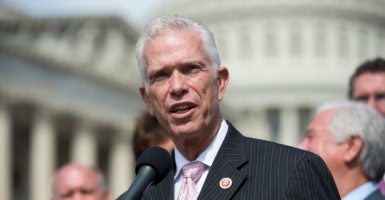 “We spend more on filing taxes every year than we put into innovation in many, many cases,” says Rep. Bill Johnson, R-Ohio. (Photo: Bill Clark/CQ Roll Call/Newscom)

Meaningful tax reform is about putting small businesses at a competitive advantage, the leader of a nonpartisan organization committed to limited government and economic freedom said Friday.

“Our cause is simple,” Alfredo Ortiz, the president and CEO of the Job Creators Network, said at the rally near IRS headquarters in Washington. “Put small businesses back at the heart of America’s economy. It is the right thing to do.”

The first priority should be tax cuts, he said.

“It starts with tax cuts, and tax cuts now,” Ortiz said. “Our tax code needs to be a moral mirror of our country’s values. It needs to begin and end by making people a priority, not government bureaucracy.”

To build awareness and support, Ortiz’s organization led a bus tour across the country.

“We travel the country. We started in Dallas, ending here today, and we have gone to the places that Washington chooses to ignore,” he said, adding:

The administration has voiced their support, and we have a president who understands firsthand the importance of giving business a greater control over their money.

Congress needs to get a tax cut to the president immediately, this year. We are saying by Thanksgiving.

The tour also made stops in places such as Oklahoma City; Louisville, Kentucky; and Christiansburg, Virginia.

At the rally, Rep. Bill Johnson, R-Ohio, joined Ortiz and several small business owners from around the country in calling for tax reform.

“I am here today to encourage my colleagues, ‘Let’s get tax reform done, and let’s get it done now,’” Johnson said.

Great to join @JobCreatorsUSA this AM in front of the IRS headquarters to talk about the need for tax reform now! pic.twitter.com/q383uofPfC

The last time the tax code was updated was in 1986, with President Ronald Reagan’s Tax Reform Act, and Johnson said the 40th president would be surprised at what the tax code has become since.

“I bet Ronald Reagan wouldn’t even recognize our tax code today,” Johnson said. “75,000 pages. We spend more on filing taxes every year than we put into innovation in many, many cases.”

Tax reform, he said, is the best way to grow small business.

If we want to get America’s economy growing at that 3 [percent] to 5 percent of [gross domestic product] rate that President [Donald] Trump and OMB Director [Mick] Mulvaney keep talking about, we have got to empower small businesses to innovate, to grow and expand again.

Stephen Moore, a visiting fellow for the Project for Economic Growth at The Heritage Foundation, said Trump will make history if he delivers on his tax reform promise.

“If we get this tax cut done, we will see the biggest economic boom in this country that we have seen since Ronald Reagan,” Moore said.

American businesses should not have to move overseas, Moore said, to have a lower tax rate.

“There is something wrong in this picture when the United States has a higher [corporate] tax rate than Russia, Sweden,” Moore said, adding:

So, we’ve got to bring that tax rate down. Let’s double the standard deduction to get every single American family that pays taxes a $1,500 tax cut next year.

Guy Berkebile, the small business owner of a chemical company in Somerset, Pennsylvania, said he is encouraged by the administration’s stance on tax reform.

“What I am hearing today from President Trump and the congressional Republicans is encouraging to me, and makes sense,” Berkebile said.

America should take a lesson from Canada when it comes to tax reform, he said.

“The federal [corporate tax] rate of 39.6 percent. I don’t understand why no one is talking about our northern neighbor, Canada,” the Pennsylvania business owner said, adding:

At a July event hosted by Freedom Partners, the Chamber of Commerce, and Americans for Prosperity, Treasury Secretary Steven Mnuchin said tax reform would happen within the year.

Trump has also taken his tax reform agenda on the road, visiting Missouri at the end of August and North Dakota on Sept. 7.

Johnson, the Ohio congressman, said he is confident tax reform will happen, given the resolve of the American people.

“The reason I know that it will work is because the strength of our nation is not inside this Beltway,” Johnson said, adding:

It is not down 1600 Pennsylvania Avenue or down at the Capitol complex. The strength of our nation is in the indomitable spirit, the heartbeat of the American people.

That’s where innovation and ingenuity thrive, and that’s what this tax reform will put back in place. I urge my colleagues to support it.