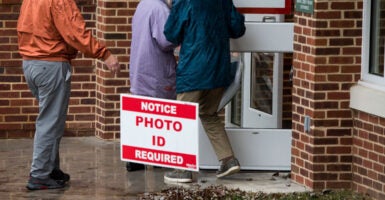 "Millions of men and women have defended our country, and not having voter ID is a gross injustice to them," reader Larry Farrell writes. Pictured: A sign about proper ID greets voters at a polling place in Berryville, Virginia, on Nov. 6, 2018. (Photo: Bill Clark/CQ Roll Call/Getty Images)

Editor’s note: Clean elections, lower taxes and spending, and back to the basics in education. All three are on the minds of The Daily Signal’s audience, judging from the mailbag at letters@dailysignal.com. Take a look.—Ken McIntyre

Dear Daily Signal: The last thing we need is federal laws governing elections, the subject of Hans von Spakovsky’s commentary (“Another Bill in Congress to Give Partisan Bureaucrats Control Over State Election Laws”). One of the interesting outcomes of having state laws is that we have some “experimentation.”

That is not to imply that states randomly test various election laws, but that they do have different policies that allow other states to see the benefits or drawbacks of alternative election processes.

I’m quite interested in New York City’s use of ranked-choice voting for their Democratic mayoral primary. If we had a federal law, that never would be tried for a national election.

I wonder: If ranked-choice voting had been used in 1992, would President George H.W. Bush have won reelection? Would it allow for more third party candidates? No one liked Bill Clinton in 1991-92, or Donald Trump in 2015-16.

Maybe another candidate would have emerged in 2016 or 2020.—Conrad Masterson, Cee Vee, Texas

Plain and simple, just for the fact that Democrats are against and suppressing the need for voter ID, as Hans von Spakovsky writes, is reason enough to have voter ID (“Another Bill in Congress to Give Partisan Bureaucrats Control Over State Election Laws”).

Election after election since voter ID has been removed from the process, we see the numbers of cases of irregularities about who actually voted. Millions of men and women have defended our country, and not having voter ID is a gross injustice to them.

If voter ID is not going to happen, then no one should ever have to show ID to get on a plane, go into a courthouse, get a job, cash a check, or get a driver’s license, just to name a few.—Larry Farrell

The President’s Speech in Tulsa

Dear Daily Signal: In Fred Lucas’ article on President Joe Biden’s speech in Tulsa, Oklahoma (“Biden Calls for Billions to Close Racial Wealth Gap”) at one point the president says he is “shocked”:

‘A home owned by a black family is too often appraised at a lower value than a similar home owned by a white family,’ Biden said. ‘… Shockingly, the percentage of black homeownership is lower today in America than when the Fair Housing Act was passed more than 50 years ago.’

Well, I am not shocked at the failure of an expensive liberal program to accomplish anything useful. This has been going on for 50 years at the cost of trillions to the taxpayer.

Meanwhile, the people whom these programs were supposed to help seem to have the same problems they had 50 years ago—only now it’s their children.

The racial wealth gap, and income inequality in general, has more to do with initiative, ambition, motivation, effort, and attitude.

Pouring money on people without these attributes will not cause a change.  You can see how successful President Lyndon B. Johnson’s Great Society was in the late 1960s.—Daniel Breig, Anaheim, Calif.

Dear Daily Signal: In response to Matthew Dickerson’s commentary on President Biden’s budget proposal, increasing the corporate tax is just another tax hike on the American consumer (“Biden Buries Bad News of a Bloated, Reckless Budget and Hopes You Won’t Notice”). Seldom do I see it pointed out that no corporation or business in the history of the free market has ever simply absorbed increased taxes into its existing bottom line and price structure.

In Econ 101, we learned that you can levy all the taxes you want against a corporation, but those taxes are passed on to the consumer in the form of higher prices.  The taxes are not absorbed by the corporation in some altruistic dedication to “paying their fair share,” as the socialists are so fond of spinning it.

It galls me beyond measure that economists and journalists continuously talk about the higher corporate taxes the president is proposing, but fail to enlighten the average American (who, sadly these days, seems to be grossly ignorant of basic economic principles) about who is actually going to pay those taxes.

Biden has pulled the usual, tried and true bait-and-switch tax routine of the New American Socialist Party (formerly the Democratic National Committee) on the average American—and he’s been allowed to get away with it.

“Nobody who makes less than $400,000 a year will have their taxes raised” (aka “eat the rich”): hilarious. Setting aside the fact that the math for his massive federal pork program doesn’t add up, woke corporate clowns such as  Jeff Bezos are laughing into their hats about the proposed higher corporate taxes.

Biden is proposing raising taxes on every single American by raising the corporate tax rate.—Scott Ward

Dear Daily Signal: It seems laughable that in nine years we will start spending less than we bring in, as Terence Jeffrey points out in his commentary on President Biden’s budget proposal (“Biden Plans to Reduce the Deficit—in 2030”). Do they really think that this is sustainable? (Sorry, I forgot that I am not supposed to think for myself.)

While most families are struggling, the federal and state governments are racking up debt that is unsustainable. While families need to learn to operate their households without debt (excluding their mortgage), they have a bad example in government.

I think the federal government needs to go on a one-year spending freeze. No spending except for federal payroll, Social Security, and Medicare (and this would be the only acceptable debt).  After one year, see how much income is brought in. Then base a budget solely on the income brought in for the next year. Then the debt needs to be paid off faster than anything else in the budget.

Let private investment and private companies take care of what needs to be fixed in this country. The government does not create jobs; never has, never will.

At some point, the holder of the debt will call in that debt and we, the people of this country, will be in big trouble. The federal government will have no choice but to raise income taxes to drastic levels to pay off that debt.

Learning to live within your income is a hard lesson. But it needs to be done, or soon our country will crack under the debt-monkey that is riding our back. Not just now, but for my kids and their kids.—Brian M., Syracuse, Utah

Leftisim, Wokeism in the Classroom

Dear Daily Signal: This is in response to Virginia Allen’s podcast interview with Louisiana high school teacher Jonathan Koeppel (“Why I Spoke Out Against Pushing Gender Ideology”).

When I taught in a Texas university, my 8 a.m. class was always full. Curious, I asked the students why they opted for an early class. Their reply was that they’d heard that in my class they didn’t have to be politically correct.

I told them that I taught English, not politics, so their goal was to be grammatically correct, not politically.

After three years, I was dismissed from teaching because I refused to join in a gay pride parade and to wear a condom on my lapel for a week.—Loretta Bedford

I have this to comment regarding Professor Nicholas Meriwether’s commentary article (“The 6th Circuit Was Right: My University Can’t Force Me to Endorse Ideas I Disagree With”).

The cardinal rule of practicing medicine is primum non nocere, or “first, do no harm.” As a board-certified family medicine physician with over 30 years of experience, I don’t understand how the many state medical licensing boards can allow physicians to mutilate human bodies, chemically or surgically, in order to “change” their sexes.

It is obvious to me that such needless interventions are the height of medical malpractice, especially since there are harmless alternatives, such as living as a transvestite.—Steven Wittenberg Gordon, MD, Overland Park, Kansas

I whole-mindedly and wholeheartedly agree with the gym teacher who testified against the pronoun policy before the Loudoun County Board of Education, as quoted in Fred Lucas’ story (“Teacher Fights Suspension for Declining to Obey School District’s Transgender Pronoun Policy.”)

The school board has unconstitutionally bruised and smeared this teacher. He should be reinstated and compensated for the attack.—Neal Greenfield

Blessings to “Crystal,” the mother who wrote the commentary about her son’s struggle (“I Am a Mother to a Son With Gender Dysphoria. Here Is My Message to Elected Officials“). She shows true Christian compassion.

As this evil of physical change grows, we experience our government forcing medical personnel to violate their commonsense values, medical values, and Christian values to do these sex-change surgeries and treatments.—Eugene Wessling, Omaha, Neb.