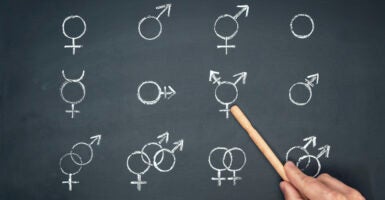 A gym teacher at an elementary school in Loudoun County, Virginia, was suspended after telling the school board that he couldn't obey a proposed policy requiring teachers to call students who say they are transgender by their preferred personal pronouns. (Photo illustration: altmodern/Getty Images)

A prominent religious liberty organization is asking a Virginia school district to reverse a decision to suspend a gym teacher for not complying with pronoun rules for transgender students in his elementary school.

The Loudoun County school district suspended Byron “Tanner” Cross, a physical education teacher at Leesburg Elementary School, after he said during a May 25 school board meeting that he would not abide by a proposed rule requiring teachers to call students who say they are transgender by their preferred personal pronouns.

To do so, Cross told the school board, would “damage children and defile the holy image of God.”

“I was a little surprised by it,” Cross said Tuesday night in an interview with Ben Domenech on Fox News Channel. “Here in America, we love our free speech and, you know, teachers are just like everybody else. We have political views, we have religious views, and we like to advocate for those views and not be punished for it. But it kind of feels like it’s going in that direction.”

Cross stated his view outside working hours, during the “public comment” portion of the school board’s May 25 meeting. Two days later, he was notified of his suspension with pay in a letter from the school district.

The school board in Loudoun County, which is about 45 miles west of Washington, D.C., and tops lists of the nation’s richest counties, is reviewing two policies under a Virginia mandate requiring all school systems to update policies on transgender students.

“Immediately suspending an employee and launching an investigation for engaging in First Amendment-protected expression, creates an atmosphere of fear and is intended to send a message to Mr. Cross and other teachers that they must toe the line or face the consequences,” says the letter, dated Friday, from Alliance Defending Freedom to a top Loudoun County school official.

“The First Amendment does not countenance such retaliation,” the letter says. “We demand that you immediately (1) rescind the suspension, (2) reinstate Mr. Cross so that he can return to class on Tuesday, June 1, (3) remove the suspension letter from his file, and (4) refrain from any future retaliation against protected speech.”

The letter signed by Tyson Langhofer, ADF senior counsel and director of its Center for Academic Freedom, asks for a response from the school district by the end of Friday. The letter is addressed to Lucia Villa Sebastian, Loudoun County’s interim assistant school superintendent for human resources and talent development.

ADF, a Christian legal aid group, is known for successfully litigating religious liberty cases, often all the way to the U.S. Supreme Court.

Wayde B. Byard, public information officer for the Loudoun County school district, told The Daily Signal in an email Tuesday: “Under state and federal confidentiality laws regarding personnel records, Loudoun County Public Schools can say only that Mr. Cross is on paid administrative leave.”

A similar instance occurred in West Point, Virginia, in 2018 when the school board there fired a French teacher after he declined to refer to a student who was a biological female by a male pronoun.

When the Loudoun County school board convened May 25, Cross was among those who spoke during the public comment portion of the meeting.

Cross noted that a recent “60 Minutes” episode reported on interviews with more than 30 young people who transitioned to the opposite sex in part because of how easy it was, but now are detransitioning.

“It’s not my intent to hurt anyone, but there are certain truths that we must face when ready. We condemn school policies like 8040 … because it would damage children and defile the holy image of God,” Cross told the school board, adding:

I love all my students, but I will never lie to them regardless of the consequences. I’m a teacher, but I serve God first and I will not affirm that a biological boy can be a girl, and vice versa, because it is against my religion, it’s lying to a child, it’s abuse to a child, and it is sinning against our God.

Two days later, Sebastian, the assistant superintendent, informed Cross in a letter that he was “on administrative leave with pay effective May 27, 2021 pending an investigation of [an] allegation that you engaged in conduct that had a disruptive impact on the operations of Leesburg Elementary School.”

In a public statement, Alliance Defending Freedom’s Langhofer said public schools “have no business compelling teachers to express ideological beliefs that they don’t hold,” and added that “it’s beyond the pale to suspend someone simply for respectfully providing their opinion at a public meeting, which is what such meetings are designed for.”

“This isn’t just about a pronoun; this is about endorsing an ideology,” Langhofer said about Cross’ suspension. “The school favors certain beliefs, and it wants to force Tanner [Cross] to cry uncle and endorse them as well. That’s neither legal nor constitutional, and neither was the school’s move to place Tanner on leave.”