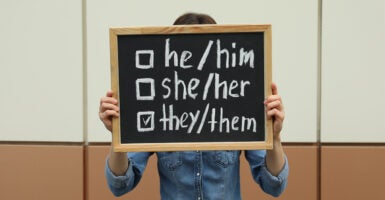 A teacher suspended for calling “transgender” students by their legal names rather than their preferred names and refusing to hide their transition from their parents just won a legal settlement. Pictured: A chalkboard with a list of gender pronouns. (Photo: Liudmila Chernetska, iStock/Getty Images)

“Truth is conformity to fact or reality; exact accordance with that which is, or has been, or shall be.”  —Noah Webster

In George Orwell’s dystopian and now-prescient work of fiction “Nineteen Eighty-Four,” the “Party” and its leader, “Big Brother,” devise a diabolically clever tactic to control the thoughts and actions of the proletariat: a new language. With this lexicon, “newspeak,” they can control the speech and actions of the masses, ensuring that both conform to the ideology of their ruling party.

This week, in the land of nonfiction, a teacher who was tired of her public school’s newspeak on gender identity just secured a $95,000 settlement against the school board that had suspended her for refusing to conform to its preferred gender pronoun policy.

Fort Riley, Kansas, middle school math teacher Pamela Ricard wasn’t looking to pick a fight. But when the Geary County School District suspended and disciplined the teacher with a 17-year history of teaching at the school, she sued.

Her offense? She addressed two students who considered themselves transgender by their legal names rather than their preferred names and pronouns, and she refused to hide their social transition from the students’ parents. Both actions were in contravention of the school district’s new communications policy.

Ricard is a Christian. She believes that God immutably creates each person as male or female, that there are only two anatomical sexes (except in very rare medical circumstances), and that the Bible prohibits dishonesty and lying.

In her May decision to let the case proceed, U.S. District Court Judge Holly Teeter recognized that Ricard was likely to succeed on her First Amendment free exercise of religion claim against the school district and granted her motion to suspend enforcement of the school’s communication policy.

Among other authorities, Teeter cited Meriwether v. Hartop, which I’ve written about here, in which the 6th U.S. Circuit Court of Appeals held that a Christian professor at a public university was not required to use a student’s preferred pronouns.

The court in that case explained that professor Nicholas Meriwether’s First Amendment interest in not using his students’ preferred gender pronouns was “especially strong … because [his] speech also relates to his core religious and philosophical beliefs” and because requiring the professor to use students’ preferred gender pronouns “potentially compelled speech on a matter of public concern.”

Teeter stated that because Ricard’s transgender students had not authorized the school to disclose their preferred names and pronouns, the teacher would face the Hobson’s choice of “complying with the District’s policy and violating her religious beliefs, or abiding by her religious beliefs and facing discipline.”

Shortly after Teeter’s ruling, the school board voted to revoke the communications policy altogether. After a brief period of continued litigation on the separate student preferred pronoun policy, the school district offered to settle.

As part of the settlement, school officials have agreed to issue a statement that Ricard was a teacher in good standing without any disciplinary actions against her at the time of her retirement in May.

Attorneys with Alliance Defending Freedom and Kriegshauser Ney Law Group represented Ricard in her lawsuit against school officials, and after settlement, filed a motion to have the case dismissed.

Joshua Ney, the lawyer who represented Ricard in the case, said:

This case provides straightforward lessons for Kansas school boards: Schools shouldn’t lie to parents and teachers don’t forfeit their constitutional rights at the schoolhouse door. The Geary County School District unsuccessfully tried to convince a federal court that a teacher should completely avoid using a child’s name during a parent teacher conference in order to hide new names and genders being used by the school for a child in a classroom. Absurdity and deception has its limits, especially in federal court. I’m glad the case clarifies the financial stakes for school boards if they attempt to force teachers to lie to parents about their students.

As recently as last term, the Supreme Court reinforced the rights of public school teachers to communicate on matters of public concern—particularly when such speech relates to a teacher’s religious convictions—and said that such speech is protected by the First Amendment.

In 2016, the Oxford Dictionaries chose “post-truth” as the international word of the year. The definition: “relating to or denoting circumstances in which objective facts are less influential in shaping public opinion than appeals to emotion and personal belief.”

While Orwell’s fictional totalitarian state of Oceania and modern America may both be suffering the ramifications of a post-truth era, at least in the case of Pamela Ricard and the Geary County School District, the score is encouraging: