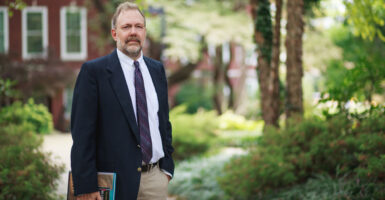 In a victory for free speech, the rule of law, and common sense, a three-judge panel of the U.S. Court of Appeals for the 6th Circuit has ruled that a philosophy professor could not be forced to use a transgender student’s “preferred pronouns,” and that his suit against the university for violation of his First and 14th Amendment rights could proceed.

The court’s decision is the first of its kind, and establishes a needed boundary against American culture’s new, brutish sexual orthodoxy.

At least within academia, one can no longer be compelled to say things one doesn’t believe.

The incident that precipitated this suit occurred in January 2018, when Shawnee State University philosophy professor Nicholas Meriwether responded to a male student’s question during a Socratic dialogue in his political philosophy class by saying, “Yes, sir.”

After class at the school in Portsmouth, Ohio, the student approached Meriwether, stated that he was transgender, and demanded that the professor refer to him as a woman, with feminine titles and pronouns.

Meriwether again offered various compromises in an attempt to protect his rights of conscience while being respectful to the transgender student, but the university rejected any arrangement other than the use of preferred pronouns or the elimination of sex-based pronouns altogether (a virtual impossibility in a scholastic setting).

When Meriwether refused, the university formally charged him with a violation of Title IX, claiming “he [had] effectively created a hostile environment” for the student.

The university placed a written warning in Meriwether’s personnel file and threatened “further corrective actions” unless he articulated the university’s groupthink.

Two years prior, in 2016, Meriwether had received a faculty-wide email from Shawnee State leadership, directing all faculty to refer to students by their preferred pronouns.

At that time, Meriwether, a devout Christian, had approached his department chair, Jennifer Pauley, with concerns about the policy. Pauley was not only dismissive of Meriwether’s concerns, she was patently hostile.

Knowing Meriwether had successfully taught courses on Christian thought for decades, Pauley claimed Christians are “primarily motivated out of fear” and “should be banned from teaching courses regarding that religion.” In her view, even the “presence of religion in higher education is counterproductive.”

Meriwether was told that even if a professor had moral or religious objections to the use of preferred pronouns, the policy would still apply.

Two years later, Meriwether’s spotless record was marred by a disciplinary note, and he was teaching under the threat of further discipline, including suspension without pay or termination, unless he agreed to fall in line with Shawnee’s pronoun policy.

U.S. District Judge Susan Dlott threw out Meriwether’s lawsuit on Feb. 12, 2020, and among other things, held that a professor’s speech in the classroom is never protected by the First Amendment. Meriwether appealed to the 6th Circuit.

In Meriwether v. Hartop et al., an impatient panel for the 6th Circuit wasted no time with perfunctory legalese or institutional pandering. It cut right to the chase in its frustration with Shawnee State’s stamping out of debate and open dialogue vis-a-vis its malignant speech policy.

The opinion, which was written by Judge Amul Thapar and joined by Judge Joan Larsen and Senior Judge David McKeague, begins:

Traditionally, American universities have been beacons of intellectual diversity and academic freedom. They have prided themselves on being forums where controversial ideas are discussed and debated. And they have tried not to stifle debate by picking sides. But Shawnee State chose a different route: It punished a professor for his speech on a hotly contested issue. And it did so despite the constitutional protections afforded by the First Amendment.

The court went on to clarify that the Supreme Court has recognized that the government may not compel a speaker to affirm a belief with which the speaker disagrees. It added that courts have recognized that the free speech clause of the Constitution applies at public universities and that “professors do not shed their constitutional rights to freedom of speech or expression at the [university] gate.”

Thapar, the first South Asian federal judge in American history and the son of self-made immigrants from India, seemed hard-pressed in containing his displeasure at the university’s looseness with long-standing judicial principles. It’s clear he doesn’t take kindly to Shawnee State’s loutish attempts at conformity.

In relaying a dizzying body of precedent, Thapar stressed that the court has rejected as “totally unpersuasive” the argument that “teachers have no First Amendment rights when teaching, or that the government can censor teacher speech without restriction.”

Simply put, the judge wrote, professors at public universities retain First Amendment protections at least when engaged in core academic functions, such as teaching and scholarship, because the need for free exchange of ideas in the college classroom is unlike that of other workplace settings.

In a critical discussion on the use of pronouns themselves, Thapar wrote:

[T]itles and pronouns carry a message. The university recognizes that and wants its professors to use pronouns to communicate a message: People can have a gender identity inconsistent with their sex at birth. But Meriwether does not agree with that message, and he does not want to communicate it to his students.

That’s not a matter of classroom management; that’s a matter of academic speech … Never before have titles and pronouns been scrutinized as closely as they are today for their power to validate—or invalidate—someone’s perceived sex or gender identity. Meriwether took a side in that debate. Through his continued refusal to address Doe as a woman, he advanced a viewpoint on gender identity …

Shawnee State allegedly flouted [a] core principle of the First Amendment. Taking the allegations as true, we hold that the university violated Meriwether’s free-speech rights.

The court’s opinion in Meriwether v. Hartop is long overdue comfort to those who refuse to bend the knee on leftist groupthink—the kind that forces a subjective and manipulable view of one person’s self to become a defining reality for everyone else. It is a stake in the ground on behalf of religious dissenters and academic freedom.

And—with poetic suitability to a Socratic dialogue—the decision reminds us that there are no “personal” truths, but only truths immemorial: realities that exist independent of our wishes to the contrary.