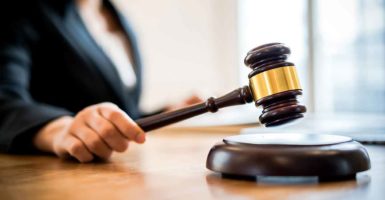 A professor at an Ohio university is appealing a federal judge’s ruling that he contends compels him to say something he doesn’t agree with.

Nicholas Meriwether, a philosophy professor at Shawnee State University in Portsmouth, Ohio, says he was “illegally disciplined” by his employer because he chose not to adhere to a male student’s insistence on being referred to with female titles and pronouns.

“Dr. Meriwether received a written warning … threatening him with ‘further corrective actions’ if he does not start expressing the University’s desired message,” Barham said in an email to The Daily Signal, adding:

These further corrective actions could include suspension without pay or termination. He is still employed at Shawnee State University, though he has this black cloud hanging over his head all the time. This punishment is illegal because it violates his First Amendment rights.

On Nov. 5, 2018, Alliance Defending Freedom filed a lawsuit on Meriwether’s behalf, maintaining that he should not be forced to use feminine pronouns and titles for a male student.

“Public universities have no business trying to force people to express ideological beliefs that they do not hold,” Barham told The Daily Signal. “Dr. Meriwether remains committed to serving all students with respect, but he cannot express all messages or endorse all ideologies.

“When the university tried to force him to do this and then punished him for exercising his rights, it violated the First Amendment,” Barham said.

U.S. District Judge Susan Dlott threw out the lawsuit Feb. 12, and Alliance Defending Freedom announced Thursday that it is appealing her decision.

Dlott, appointed by President Bill Clinton in 1995, is senior judge of the U.S. District Court for the Southern District of Ohio.

Emilie Kao, director of the DeVos Center for Religion and Civil Society at The Heritage Foundation, told The Daily Signal in an email that Meriwether is being robbed of his constitutional rights.

“Compelling a university professor to utter scientific falsehoods in the name of a political ideology is un-American,” Kao said. “The Constitution protects the freedom to speak according to one’s conscience. It must be protected on controversial issues like transgender ideology if diversity of thought and intellectual integrity are to be preserved.”

Jonathan Butcher, a senior policy analyst in Heritage’s Center for Education Policy, said in a written statement provided to The Daily Signal that “students and professors should be allowed to speak freely on public policy issues of the day and not fear reprisal from the university based on positions the school has decided to take on such topics.”