How to Restore Optimism and Verve to the US Economy 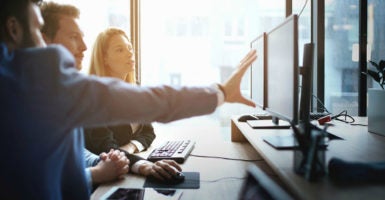 Businesses were hit hard by the tens of thousands of new regulations issued during the Obama presidency. (Photo: iStock Photos)

America’s entrepreneurial dynamism has been falling, and the cost of inaction grows daily.

According to a recent study by the Economic Innovation Group, America “suffers from a problem of too little creation—not too much destruction—perhaps for the first time in its history.”

Over the past decade, our economic and job creation engine has run out of steam.

One critical underlying factor for this declining economic dynamism has been the startling decline of America’s economic freedom during Barack Obama’s eight-year presidency.

To give just one example, during the Obama years, tens of thousands of new regulations were enacted that cost businesses over $100 billion per year in compliance costs.

While the financial costs are huge, the real losses are the jobs that would have been created had entrepreneurs not been stifled by the heavy hand of government.

The Heritage Foundation’s 2017 Index of Economic Freedom—an annual global study that compares countries’ entrepreneurial environments—highlights the urgent need for the U.S. to change course. For the ninth time since 2008, America has lost ground to other countries.

The good news is that President Donald Trump has made it a priority to roll back Obama-era regulations.

The American people rallied to Trump on the promise of getting our country back on track—by reforming the tax code, repealing Obamacare, cutting spending, and eliminating the needless red tape that stifles entrepreneurship and innovation.

However, as Heritage Foundation President Ed Feulner pointed out in his recent commentary:

[M]ore than five months into the new Congress and the new administration, precious little draining has occurred. The delay in action is not only frustrating, it’s expensive. … A filled swamp is expensive to maintain. The American people are waiting for Congress to drain it. And they should expect their elected representatives to stay in Washington and make the real changes they were elected to do.

Now is the time to act and unleash economic freedom once again in America.