Trump Is Right. ‘Our Tax Code Is a Giant, Self-Inflicted Economic Wound.’ 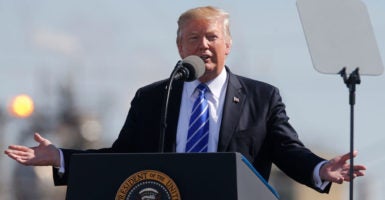 In his second speech in two weeks on the need for tax reform, President Donald Trump again made a strong case, explaining that “our tax code is a giant, self-inflicted economic wound.”

This time speaking in North Dakota, the president reiterated his four key goals for updating the broken U.S. tax system: a simplified tax code, a middle-class tax cut, a more competitive business environment, and the ability for business to bring home trillions of dollars of overseas profits. To this list of goals, I would also add full expensing as a critical reform.

The president’s first goal is “a tax code that is simple, fair, and easy to understand.”

To meet this goal, tax reform must eliminate tax subsidies. The tax code should not be used to pick winners and losers. That means tax reform should eliminate as many individual and corporate deductions, credits, exclusions, and exemptions as possible.

The current collection of privileges in the tax code make it so those who can afford accountants and lawyers to navigate the code are able to benefit, while every other American merely files their taxes and hopes for the best.

Cronyism in the tax code not only slows economic growth, but also increases complexity and makes the tax code unfair.

The president’s second goal is to “cut taxes for middle-class families.”

This one is simple. Tax reform must lower tax rates for individuals, allowing Americans to keep more of their own money.

For individuals and most small businesses (who pay their taxes as individuals), the top marginal federal tax rate can be as high as 43.4 percent.

Individual tax rates are too high. In addition to keeping more of our own money, lower rates would strengthen the economy by improving incentives to work, save, and invest.

Lowering rates should be paired with eliminating many current credits and deductions. The state and local tax deduction, for example, forces federal taxpayers in low-tax states to subsidize taxpayers in high-tax states.

Federal income tax rates could be reduced by about 12.5 percent for everyone if the state and local tax deduction was eliminated.

>>> 4 Ways to Change Our Tax Code to Boost Economic Growth

For his third goal, the president advocated “a tax code that restores our competitive edge so we can create more jobs and higher wages for American workers.”

The most effective way to create more jobs and higher wages for Americans is to allow a simple reform called full expensing.

The United States has an outdated and overly complex system that makes it near impossible for businesses to deduct the full cost of new investments—the type of investments needed to turn new and innovative ideas into productive businesses.

That’s the type of entrepreneurship that has historically set America apart from the rest of the world.

But our current tax system artificially raises the cost of investing in new entrepreneurial ideas and business expansion by denying a full deduction of the investment cost.

A system that allows full expensing would let businesses deduct all investment expenses from their taxable income immediately, such as the cost of new office space needed to hire additional workers.

This simple change could grow the economy by more than 5 percent over 10 years because expensing would eliminate part of the current tax code’s bias against investment.

The president’s fourth goal is to “bring back trillions of dollars in wealth that’s parked overseas and just can’t come back.”

The United States has the highest corporate tax rate in the developed world, with an average combined federal and state rate of almost 40 percent. Compared to China’s 25 percent or Ireland’s 12.5 percent, the U.S. offers one of the least attractive tax business environments in the world.

To make matters worse, the high U.S. corporate tax rate is imposed on income earned in other countries, encouraging businesses to keep trillion of dollars overseas. The combination of the worldwide tax, imposed at internationally high rates, makes U.S. business uncompetitive relative to the rest of the world.

America-first tax reform should focus on making the U.S. the most attractive place in the world to do business, rather than punishing those who choose to do business elsewhere through minimum taxes or forced repatriation.