Treasury Secretary Says Tax Reform Will Happen Within the Year 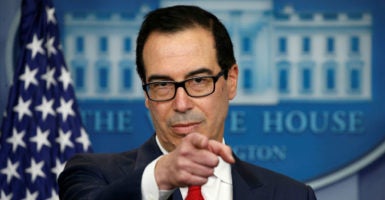 “We are going to simplify personal taxes where 95 percent of Americans will be able to fill out their tax return on a large postcard,” says Treasury Secretary Steve Mnuchin. (Photo: Kevin Lamarque/Reuters /Newscom)

“We will have success,” Mnuchin said Monday during an event hosted by Freedom Partners Chamber of Commerce and Americans for Prosperity. “This is a pass/fail exercise and we will pass tax reform, period.”

The last time the tax code was updated was in 1986 with President Ronald Reagan’s Tax Reform Act. Mnuchin said the tax code is overdue for a change, and Congress can achieve it in five months.

“We are going to simplify personal taxes where 95 percent of Americans will be able to fill out their tax return on a large postcard,” Mnuchin said. “You can imagine how that makes things easier for them and easier for us at the IRS.”

The tax code for businesses also will be changed, Mnuchin said.

“We are going to make the business tax competitive again and bring back trillions of dollars of money that is offshore, that is going to invest in America in jobs, in factories, and capital.”

Marc Short, Trump’s director of legislative affairs, who also spoke at the event, said the goal is straightforward.

Both Democrat and Republican ideas should have a place in the process, Short said.

“I think it can be bipartisan,” Short said. “We have met with over 200 members of Congress … and we have engaged many, in fact, Democrats in that conversation. I think they are excited for tax reform as well.”

The unknown variable is how minority leadership will act, Short said.

“Obviously the question will be what do Nancy Pelosi and Chuck Schumer do because they are trying to keep their conferences locked in an effort to resist efforts of the Trump administration,” Short said, adding:

Many Democrats recognize, particularly in the upper Midwest, many of them realize what has been happening on the manufacturing base, seeing jobs flee overseas, seeing the middle class hurt the way it is, and so we’re confident right now that we’ll be able to earn their support for our tax reform agenda.

Short said the process will likely kick into high gear after Labor Day.

“The expectation is that we’ll begin the mark up process in the House after Labor Day,” Short said. “There’ll be markups and hearings in the Senate Finance Committee roughly at the same time. And those processes will probably play out by getting a bill through the House through the month of October and then in the Senate in November.”

Short said reconciliation, which requires only a simple majority vote to pass legislation, could be used to pass tax reform, but he did not rule out other avenues of passage.

“We think the budget debate will largely be [in] September-October so we will have a budget complete and, if that’s the vehicle we use, then so be it,” Short said. “But … if there’s bipartisan support, that’s another route, too. So we’re not necessarily locked into that direction.”

Mnuchin said Trump is ready for any fight that special interests might throw at him.

“This is the greatest negotiator,” Mnuchin said. “He understands business. He understands that he’s going to be on the road helping us sell it and he knows that this is what creates economic growth.”

Mnuchin said failure is not an option.