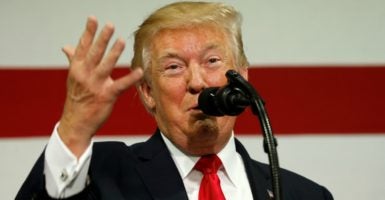 President Trump talks about his principles for tax reform during a rally Wednesday in Springfield, Missouri. (Photo: Kevin Lamarque/Reuters/Newscom)

“I don’t want to be disappointed by Congress,” @POTUS says.

“Let’s put, or at least try to put, the partisan posturing behind us and come together as Americans to create the 21st century tax code that our people deserve,” Trump told the audience Wednesday at the Loren Cook Company in Springfield, Missouri.

“Instead of exporting our jobs, we will export our goods.”

Democrats have framed past Republican efforts at tax reform as a gift to the rich, but Trump put his own populist stamp on the issue by talking about how the current complex tax code harms average Americans, leading to fewer jobs, and how a new system would be fairer, expand economic growth to more than 3 percent, and make America more competitive.

“If we achieve sustained 3 percent growth, that means 12 million new jobs and $10 trillion dollars of new economic activity over the next decade,” Trump said.

Trump noted that Springfield, Missouri, was the birthplace of Route 66.

“This is the place where the main street of America got its start, and this is where America’s Main Street will begin its big, beautiful comeback that you are seeing right now,” Trump said.

“This is a comeback of historic proportions. You’re seeing it happen right now. We’re here today to launch our plans to bring back Main Street by reducing the crushing tax burden on our companies and on our workers.”

Referencing the slow pace of Congress on other issues, Trump said, “I don’t want to be disappointed by Congress. I think Congress is going to make a comeback.”

In the speech, Trump laid out his four principles for tax reform.

The first is to greatly simplify the tax code. Currently, as studies show, more than 90 percent of individuals and businesses use either paid tax preparers or special software to file their taxes. According to the IRS Taxpayer Advocate Service, taxpayers spend 6 billion hours per year complying with the tax code.

Trump wants Americans to be able to file taxes on a single page.

The second is to slash corporate taxes, which he said would bring back jobs to the United States, which would mean more companies competing for U.S. workers, and “a pay raise Americans have been looking for, for many, many years.”

Trump later said that under tax reform, Americans would get a “big, fat, beautiful paycheck.”

“The strategy of our economic rivals has worked. They’ve made their taxes lower and far lower in many cases than ours, and jobs left our country,” Trump said.

He added, “We have totally surrendered our competitive edge to other countries. We’re not surrendering anymore.”

“They’ve been the forgotten people, but they’re not forgotten anymore, I’ll tell you that,” Trump said.

He added that one of his goals was helping parents afford child care, an issue that is “so important to my daughter [Ivanka Trump], it’s one of her very big beliefs.”

The fourth principle is to bring back trillions of dollars from companies that do business overseas and park their profits offshore. Fortune 500 corporations are holding more than $2.6 trillion in profits offshore to avoid $767 billion in U.S. federal taxes, according to the Institute on Taxation and Economic Policy.

Massive tax cuts to the rich ???conservative magic??? “trickle down” to the middle class

Others were more supportive, such as Alfredo Ortiz, CEO of the Job Creators Network.

“The president is determined to energize the American economy, especially with the necessary tax cuts for job creators – small businesses all across the country who create 70 percent of all new jobs,” Ortiz said in statement.

Trump and Congress should go all in to fix the tax code, said Brent Gardner, chief government affairs officer for Americans for Prosperity.

“We deserve a tax code built for growth. For too long, the tax system has been rigged to favor the powerful and well-connected, but tax reform will level the playing field and allow for the growth of family paychecks, the growth of jobs, and the growth of the American economy.”