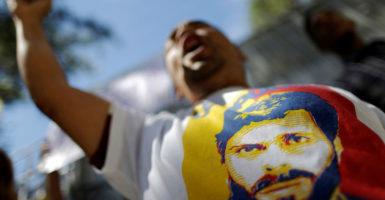 Jackson Ventrella is a member of the Young Leader's Program at The Heritage Foundation.

Lilian Tintori understands the Venezuelan regime for what it is: corrupt, criminal, and evil.

Her husband, Leopoldo López, was stripped of his political rights when President Hugo Chávez saw the potential and dangerous competition that he posed. Eventually this led to Leopoldo’s investigation and his current imprisonment, which has been ongoing for three years now.

López is one of nearly 110 political prisoners the Venezuelan government refuses to release. The current president, Nicolás Maduro, frequently protects the corrupt while punishing those who support the opposition. He even contrives enemies for himself out of thin air.

Consider the case of Joshua Holt.

Holt is an American citizen who is currently being held and tormented in a Venezuelan prison after being arrested on “terrorism” charges. After traveling to Venezuela to get married, both he and his wife ended up in prison and remain there to this day.

The inhumane treatment Holt has received is horrifying. Not only has he lost 50 pounds, but the judge has conveniently skipped his trial four times, which seems to have crushed any hope that his case will be heard.

Or consider former political prisoner Francisco Marquez. A dual U.S.-Venezuelan citizen, Marquez was held in a Venezuelan prison for four months before his eventual release. Even after having charges dropped, he was not released.

Marquez, along with many other inmates, was tortured by the brutal prison staff. This created an environment of terror and fright due to the frequent screams of terror.

The inhumane treatment of prisoners only adds to the long list of intentional evils committed by the Chávez and Maduro regimes.

This brutality has not gone over well recently with the new U.S. administration. President Donald Trump recently tweeted, “Venezuela should allow Leopoldo Lopez, a political prisoner and husband of Lilian Tintori out of prison immediately.”

This remarkable departure from the Obama administration’s policy toward Venezuela reflects a new and robust U.S. commitment to the people of Venezuela. It is a clear sign that the United States stands against the corrupt Maduro regime and supports the democratic aspirations of ordinary Venezuelans.

The grave human rights violations this regime has committed have spurred the United States, along with other regional stakeholders, to pressure the regime to release its political prisoners.

Former U.S. Ambassador to Venezuela Otto Reich’s assessment of the situation points in the right direction. He says that the United States ought to be “proactive, not vocal: We should not engage in spitting contests with cobras or in verbal battles with deceitful third world autocrats.”

The Maduro regime is undoubtedly governed by the corrupt. Tareck El Aissami, the newest vice president of Venezuela, is widely acknowledged to have ties with drug cartels as well as the terrorist group Hezbollah.

It is clear that the Venezuelan regime does not prefer any ethical system over another, so long as it retains control.

The Obama administration knew full well that the Venezuelan vice president is a criminal, but it took no strong action. Yet within the first month of Trump’s administration, El Aissami’s illicitly obtained assets in the U.S. were confiscated.

The Trump administration’s clear position on Venezuela is a welcomed change from the moral ambiguity of his predecessor. Moving forward, the administration must continue holding the Venezuelan government accountable in the hopes of bringing political freedom to the Venezuelan people.

Note: This article was updated to correct for the fact that Francisco Marquez experienced torture in prison.