Prospects for Freedom in Venezuela Are High Under Trump 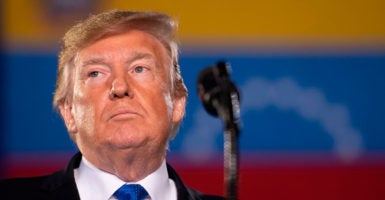 According to media reports, President Donald Trump recently stated he would consider meeting with the illegitimate leader of Venezuela, Nicolas Maduro. Specifically, the president stated: “I always say, you lose very little with meetings. But at this moment, I’ve turned [the Maduro regime’s request to meet] down.”

In the same interview, he also expressed concerns on the progress of Venezuela’s transition led by interim President Juan Guaidó.

Some are interpreting these statements to mean that Trump is considering an alternative direction on Venezuela policy.

If the president’s critics were truthful, they would acknowledge the U.S. has consistently said it is willing to discuss the details of Maduro’s departure from Venezuela under non-negotiable conditions.

In reality, Trump is doing his job by always looking at a range of options to resolve difficult crises. He has rightfully concluded that in this case, talks with Maduro would not yield results.

There is no doubt that the Trump administration inherited a dysfunctional mess with U.S. policy toward Venezuela. Regional partners questioned the U.S.’ commitment to democracy, and foreign adversaries acted like the hemisphere was up for grabs. How could they not when the Obama administration refused to respond to the dictatorship’s rabid power grab over the years?

Even in 2014, when regime thugs slaughtered nearly 50 anti-regime demonstrators and arrested another 3,500 Venezuelans, President Barack Obama refused to sanction a handful of Venezuelan officials responsible for the violence.

In its words, the Obama administration wanted to “encourage an end to the violence and authentically inclusive dialogue to address the Venezuelan people’s legitimate grievances.”

The previous administration neglected to comprehend that there cannot be dialogue at the barrel of gun.

This same flawed philosophy drove the Cuba negotiations. For nearly two years, Obama’s officials secretly negotiated with the Castro regime. While the Castros received the return of three convicted spies, diplomatic recognition, removal from the U.S. Department of State’s list of state sponsors of terrorism, and the White House lobbying for increased commercial opportunities, America was left empty handed and only given back a single American hostage.

How are one-sided negotiations in the U.S.’ interests?

Now look at Trump’s Venezuela policy, and consider what items would be on the agenda should the U.S. and Venezuelan regime ever negotiate. Over the last three years, the U.S. has sanctioned nearly 150 Venezuelan regime officials for corruption, human rights abuses, and narcotrafficking. This means their money and property in the U.S. is seized and they are unable to travel to America.

One regime official—who was designated a narcotrafficker for working with the Sinaloa cartel—had, to date, $500 million of his drug-related assets seized in America. This demonstrates how Maduro’s criminality is not confined to Venezuela’s border.

Recently, the U.S. indicted Maduro and his inner circle for narcoterrorism, and the Department of Justice is now offering $15 million for his arrest—the highest award offered for any non-terrorist in history.

Beyond targeted sanctions, the U.S. has broadened its sanctions regime to Maduro’s international enablers in Russia’s national oil company, Rosneft; security and intelligence networks in Cuba; and other international officials involved in corruption.

To enhance these capabilities, the U.S. also helped Latin American countries expand their terrorism-designation capabilities to clamp down on illicit financing networks.

Additionally, U.S. humanitarian assistance has helped displaced Venezuelans throughout Latin America, which has been a key element of the U.S.’ policy toward Latin American partners overwhelmed by Venezuela’s humanitarian crisis.

If the last three years are any indication, the future of U.S. policy toward Venezuela is poised to remain focused on preventing another Cuba in the Western Hemisphere.

Yet it seems the president’s critics are more interested in politics and not policy. If they weren’t, they would acknowledge that the Trump administration has advanced Venezuela’s freedom in a meaningful and decisive way.